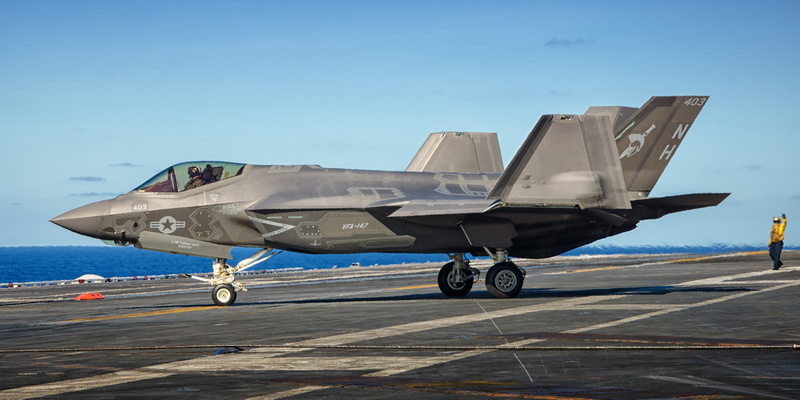 The Navy declared today that its Lockheed Martin F-35C Lightning II Joint Strike Fighter was operationally ready to deploy and conduct missions around the world.

“The F-35C is ready for operations, ready for combat and ready to win,” Commander, Naval Air Forces, Vice Admiral DeWolfe Miller H. III said in a statement today, “We are adding an incredible weapon system into the arsenal of our Carrier Strike Groups that significantly enhances the capability of the joint force.”

The Mighty Argonauts of VFA-147 have a strong tradition of pride and professionalism that dates back to their beginnings as an A-7 squadron. Attack Squadron 147 was commissioned as the Navy's FIRST A-7E Corsair II squadron on February 1, 1967 in Lemoore, California. VA-147 was the FIRST squadron to employ the Corsair II into the Southeast Asian Conflict while deployed to the Western Pacific aboard the USS RANGER (CVA-61), and amassed a total of five combat deployments conducting air operations over Vietnam.

The first F/A-18C arrived on December 6, 1989. A complete transition to state-of-the-art technology resulted in new tools, newly graduated technicians, and 11 new LOT XII aircraft to commence integrated warfare training. The Argonauts were the FIRST squadron to receive the new Lot XII "Night Attack" Hornets and quickly put them in action on their first WESTPAC deployment to the Persian Gulf in March of 1991. Combat air patrol missions over Iraq and Kuwait in support of Operation Desert Storm during troop withdrawal operations highlighted the deployment.

The squadron began transitioning to the F/A-18E Super Hornets in October 2007, and completed transition in February 2008. VFA-147 and CVW-9 deployed with John C. Stennis (CVN-74) on a scheduled Western Pacific deployment on January 13, 2009.