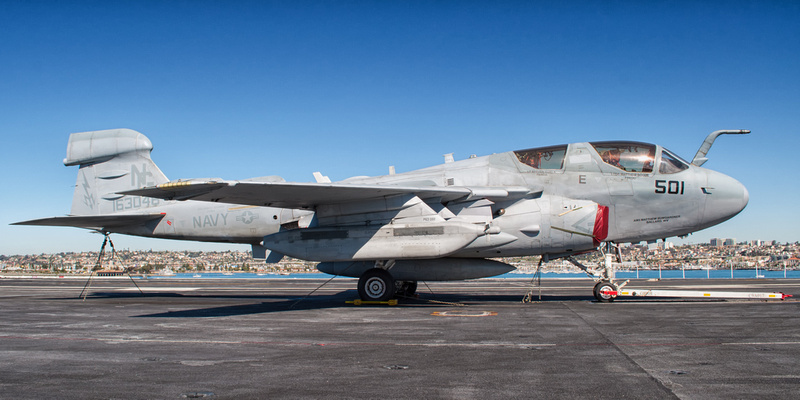 This month the US Marine Corps officially retired their Grumman EA-6B Prowlers, and we had to officially say "goodbye" to the venerable Prowler.

In the mid-80s TOPGUN came along and I fell in love with Naval Aviation and the Grumman F-14 Tomcat.  As my passion for Naval Aviation grew, my new love became the Grumman A-6 Intruder.  But, then there's the Winnebago version of the Intruder, the Grumman EA-6B Prowler.  She's ugly, but yet beautiful in a warfighter and electronic jammer sort of way.  While I never had the opportunity to photograph active Tomcats and Intruders, over the years I had plenty of time to have a deep veneration for the Prowler and photograph her in action.  In fact, we even named our dog Prowler.

While I never had the opportunity to photograph a Prowler operating from a carrier deck, I was able to see one on the deck of the USS John C. Stennis (CVN 74) during the Centennial of Naval Aviation (CoNA) in San Diego, California.  I also had plenty of opportunities to catch them operating around NAF El Centro, and I was even on hand to catch a Prowler being retired to the Palm Springs Air Museum.

The Grumman EA-6B Prowler was a long-range, all-weather aircraft with advanced electronic countermeasures capability.  It's a twin-engine, mid-wing configured aircraft that has a side-by-side cockpit arrangement.  The EA-6B weapons systems include the AN/ALQ-218 (V)2 Tactical Jamming Receiver, ALQ-99 tactical jamming pod, USQ-113 communications jammer, and AGM-88 High-Speed Anti-Radiation Missile (HARM).  The EA-6B's primary mission was to ensure survivability of U.S. and coalition forces through the identification and Suppression of Enemy Air Defenses in support of strike aircraft, ground troops, and ships.  It did this by interrupting enemy electronic activity and obtaining tactical electronic intelligence within the combat area.

The Prowler was in service with the U.S. Armed Forces from 1971 until 2019.  It has carried out numerous missions for jamming enemy radar systems, and in gathering radio intelligence on those and other enemy air defense systems.  From the 1998 retirement of the United States Air Force EF-111 Raven electronic warfare aircraft, the EA-6B was the only dedicated electronic warfare plane available for missions by the U.S. Navy, the U.S. Marine Corps, and the U.S. Air Force until the fielding of the Navy's EA-18G Growler in 2009.  Following its last deployment in late 2014, the EA-6B was withdrawn from U.S. Navy service in June 2015, followed by the USMC in March 2019.