We Support Planes of Fame

I have always been fascinated with warbirds, there's just something special about a World War II fighter or bomber struttin' its stuff in the air!  I grew up with a B-17 based only about 20 minutes from my parent's house, and I fell in love with her at a very young age.  I'm sure that this was the seed that grew into my love for warbirds.

Last year I was finally able to make it out to Planes of Fame for their 2016 air show.  This was my first time visiting Chino, California, and I was hooked right from the start.  It was amazing to see so many warbirds in the air at the same time!  With this being my first visit to Chino, it was cool to learn that the Yanks Air Museum was located at the same airport.  Every day of the 2016 air show we parked out by the Yanks Air Museum and had to walk past Yanks to get to the air show's entrance.  Walking along their fence line you could see a few of the aircraft in their collection.  This made me very interested in Yanks, and I told myself that one day I would want to go visit them.

Rylan wasn't able to go to the 2016 Planes of Fame Air Show, so we have been making plans to attend this year.  We already have our hotel rooms booked and our Planes of Fame Media Credentials should be arriving within the next week or two.  We are really looking forward to this trip, not only to see the aircraft, but to also see many of our friends that tend to gather at these events.  During this trip we were planning to visit Yanks Air Museum and also the Palm Springs Air Museum.  But then, last night on Social Media, it came to my attention that the Yanks Air Museum, along with a few other parties, has field suit against Planes of Fame to stop their annual air show.  The suit claims that the annual air show causes financial hardship for the parties that filed.  Now I'm not an expert on the subject, but I just don't see how one weekend per year can cause enough financial hardship that these parties felt the need to file this suit.  One would actually think that the annual air show would actually drive traffic to these places.  But again, I'm not an expert.  I feel that this is a petty attempt to stop something great, something that we can feel proud about and learn something from.  Because of this, Rylan and I will never visit Yanks and we will never give them any sort of support.

Once I saw the news about this suit, I felt the need to support and stand behind Planes of Fame.  I have shared their petition on our Social Media outlets to help get the word out and to bring awareness to this issue.  Here is the information and a link to the online petition to show your support to Planes of Fame. 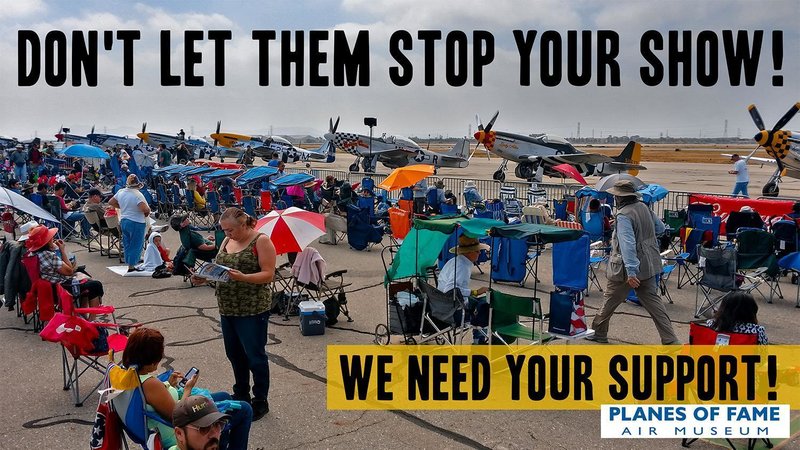 DON'T LET THEM STOP YOUR SHOW!

The annual Air Show is one of the few remaining events in Southern California where visitors from around the world can enjoy the sights and sounds of aircraft from the Golden Age of Aviation flying overhead.  Each year the Air Show attracts thousands of families, aviation enthusiasts, and others who come together to witness rare and historic aircraft, as well as some of the most talented aviators take to the skies.  The Planes of Fame Air Show at Chino Airport is considered one of the top five air shows in the country.

As a non-profit, 501c.3 organization, the annual Air Show serves as the primary fundraising effort for the Planes of Fame Air Museum.  Revenue from the annual Air Show helps us to carry on our mission to preserve aviation history, inspire an interest in aviation, education of the public, and honor aviation pioneers and veterans.  And as this year’s Air Show marks the 60th anniversary of the founding of Planes of Fame Air Museum, we have seen how our mission has impacted multiple generations of families, and is introducing aviation to entirely new generations.

For the local community, the annual Air Show provides an economic stimulus to local businesses and entrepreneurs both on and nearby the airport.  For the City of Chino and the County of San Bernardino, the Air Show provides increased visibility as thousands of visitors flock to the Chino Airport for the show.

In response to the inquires regarding the nature of the lawsuit, the allegations involve the experience of economic hardship over Air Show weekend and an inconvenience to operations.

PLEASE RESPOND ASAP AND SHARE THIS PETITION ON ALL OF YOUR SOCIAL MEDIA AND EMAIL.  Help us save the Air Show!  We are asking our friends, visitors, community, and colleagues to join together to support the Air Show.  Please send us a note or letter indicating your backing of the Air Show and be sure to include your thoughts on why it needs to continue. Your letters and comments need to be received by April 4, 2017.

Please send all comments, concerns and questions to [email protected]

Please take a moment, if you haven't already, to sign the petition and show your support to Planes of Fame.

You would think that the parties involved would be able to find a way to work together and capitalize on the air show to draw more business the rest of the year. It's almost lie Planes of Fame is giving them free advertising, and they are just not jumping on the opportunity.

Also, if you haven't already, please make sure you sign the petition, just follow the link in the blog.


All the best,
Matt Ottosen