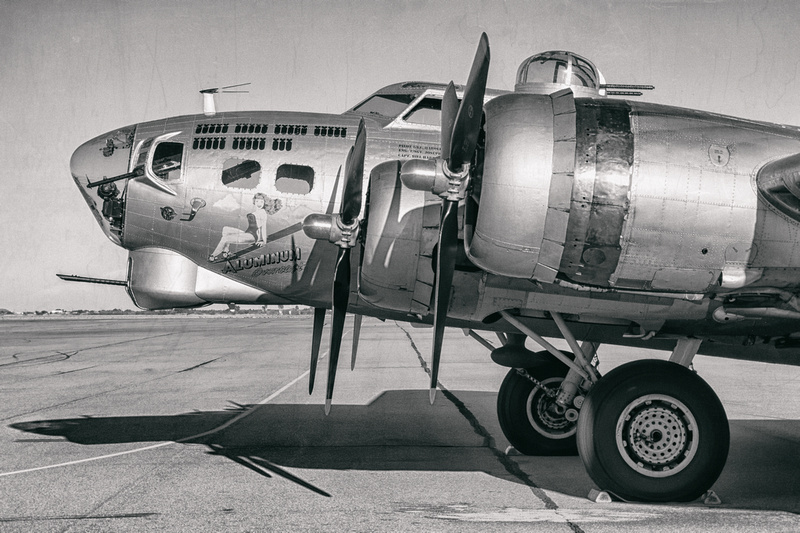 Aluminum Overcast is a Boeing B-17G Flying Fortress owned and operated by the Experimental Aircraft Association (EAA).  She is currently on tour and recently made a visit to Marana Regional Airport (AVW, KAVQ, AVQ) just outside Tucson, Arizona.  Rylan and I were already in Tucson for the weekend, so we decided to make a quick visit to Marana Regional Airport to check out this beautiful aircraft.

The morning we arrived, Aluminum Overcast was already being prepared to take some lucky passengers on a flight, so we didn't have much time before we would be required to leave the ramp.  We had just enough time to walk around, take a few photos, and chat with one or two of the EAA volunteers.  While I have a special love for the B-17 and have spent a lot of time with the CAF's Sentimental Journey, this was my first time seeing Aluminum Overcast and getting to learn a little more about the EAA.

The EAA is a growing and diverse organization of members with a wide range of aviation interests and backgrounds.  EAA was founded in 1953 by a group of individuals in Milwaukee, Wisconsin, who were interested in building their own airplanes.  EAA expanded its mission of growing participation in aviation to include antiques, classics, warbirds, aerobatic aircraft, ultralights, helicopters, and contemporary manufactured aircraft.  Today they operate one of the few airworthy B-17s left, a Boeing B-17G-VE Flying Fortress with serial number 44-85740.

Aluminum Overcast was delivered to the U.S. Army Air Corps on May 18, 1945.  Although delivered too late to see action in World War II, the airplane has an interesting history.  Purchased as surplus from the military inventory for a mere $750 in 1946, the airplane has flown more than one million miles.  It has served as a cargo hauler, an aerial mapping platform and in pest control and forest dusting applications.  The airplane's return to its military roots began in 1978, when it was purchased by a group of investors who wished to preserve the heritage of the magnificent B-17.  The group, "B-17s Around the World," was headed by Dr. Bill Harrison.  Their goal was to return the B-17 to its former glory.  The economic reality of simply maintaining a vintage bomber, let alone the cost of restoration, prompted the group to donate the B-17 to EAA in 1983.  Since that time, an extensive program of restoration and preservation was undertaken to ensure Aluminum Overcast would be a living reminder of World War II aviation for many years to come.  The restoration has taken more than 10 years and thousands of hours by dedicated staff and volunteers at EAA’s headquarters in Oshkosh, Wisconsin.  Aluminum Overcast proudly carries the colors of the 398th Bomb Group of World War II, which flew hundreds of missions over Nazi-held territory during the war. Aluminum Overcast commemorates B-17G #42-102516 which was shot down on its 34th combat mission over Le Manior, France, on August 13, 1944.  Veterans of the 398th helped finance the bomber's restoration.

Visiting Aluminum Overcast was an awesome experience, to be reminded of the great history of the Flying Fortress and to learn about the history of this Flying Fortress and what she is a flying historical reminder of.  If you have the chance to get out and see her on tour, I highly recommend it.  It will be an experience that you will never forget.