Luke Air Force Base was proud to present to the Arizona community the "75 Years of Airpower" airshow on April 2-3, 2016.  Attendees were able to experience exciting aerial acts, an array of static displays from both the past and present, and have the chance to interact with the Airmen who carry out the Luke mission of "Training the World's Greatest F-35 and F-16 Pilots."  The Airmen at Luke were excited for the chance to say 'thank you' to the community for the incredible support they give their mission each day.

Rylan and I had been looking forward to this air show for months, and just a few days prior we got even more excited.  I received an email stating that I would be flying (not jumping) with the US Army Golden Knights during their first jump on April 3.  This would be the jump that would kickoff the air show for the day.  While I was up in the air with the team, Rylan was on the ground catching all of the action. Prior to taking off, I was able to watch the team prep for their jump.  Packing their parachutes and getting all of their gear ready, and watching them practice their jump during what they call a "dirt dive."

We had been told to dress warmly, but I honestly wasn't prepared for how cold it was going to be.  Up at 12,500' it had dropped to around 30°F, and I was absolutely freezing.  When they jumped, I was so cold and unprepared for how fast things were going to happen, I completely missed all of the photo opportunities of the team jumping from the aircraft.

ABOUT
For over fifty-seven years members of the U. S. Army Parachute Team have been marking the milestones of achievement and an evolution of excellence serving as “Ambassadors” of the Army’s only official Demonstration team. The Golden Knights portray the image of being the most formidable parachuting competitors and demonstrators in the world today.

If you mention the name “Golden Knights” to someone today in any of the fifty states, and most likely what comes to mind is a phenomenal demonstration they watched in past years at an air show or sporting event. But if you mention it to a sport parachutist, they will most probably think of the competitors they jumped against or heard about in parachute meets across the country or abroad.

HISTORY
The Strategic Army Command Parachute Team, or STRAC, was formed in 1959 by nineteen “Airborne” Soldiers from various military units. Brigadier General Joseph Stilwell Jr. was responsible for gathering these Soldiers with the original intent to compete during the Cold War effort. This new U.S. All-Army team swept the international competition circuit, in what was then the Soviet dominated sport of skydiving. Later that year, on November 1st, this newly formed team performed their first demonstration in Danville, Virginia.

In 1961, the Department of Defense announced on June 15th, that the STRAC team would become the United States Army Parachute Team. The team is one of three authorized DoD aerial demonstration teams, along with the Thunderbirds and Blue Angels.

On October 15, 1962 the team earned the nickname the “Golden Knights” on the competition field of battle. Golden, signifying the gold medals the team had won; Knights, proving that they were world champions and the fact that the Team had “conquered the skies.”

MISSION
As the Army Ambassador; the USAPT conducts worldwide parachute demonstrations, competitions and a tandem orientation program to connect the U.S. Army with the American public and enhance the Army’s recruiting efforts, while simultaneously providing technical expertise in support of military free fall programs.

Missions of today’s Army are still the same as 239 years ago when the Army was established to Prevent, Shape and Win against our advesaries.

By request, the team will test and evaluate new parachuting equipment and techniques that assist in improving operations and safety for the military free fall teams.

Once we were safely back on the ground, and starting to thaw out, it was time to enjoy some of the show.  We were able to watch the CAF's Tora! Tora! Tora! demonstration, one of my favorite air show demonstrations. 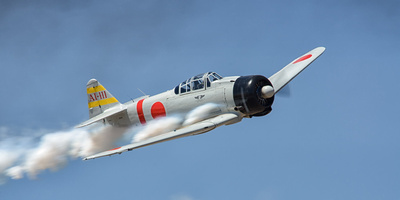 We also were able to watch the first official F-35A US Air Force Heritage Flight with a Lockheed P-38J Lightning and a Lockheed Martin F-35A Lightning II.  It was awesome to see these two Lightnings fly in formation! 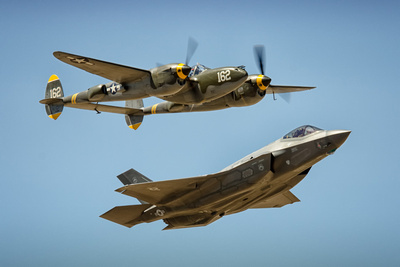 Special thanks to all the men and women of the US Air Force, and for the US Army Golden Knights for letting us fly along.