US Navy Aircraft Carrier Embark (Part 2 of 4) - The Approval 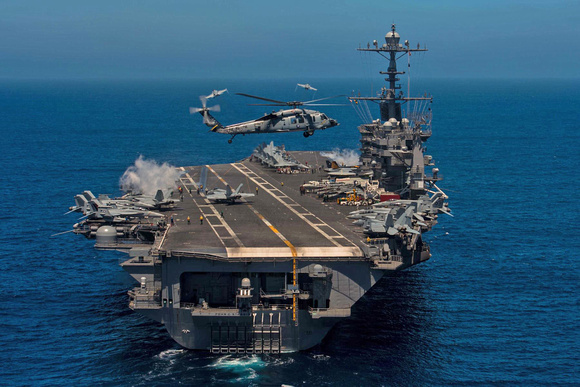 The tour of the USS John C. Stennis (CVN 74) during the Centennial of Naval Aviation (CoNA) at Naval Air Station North Island was awesome.  Out of the three times I have toured US Navy aircraft carriers, it was the first time one of the ships had any aircraft aboard.  It was really cool to see these aircraft aboard the ship, in the true environment they were designed for.  The ship's PAO, LCDR Cindy Fields, was our tour guide for the hour we were aboard, and she was very informative telling us about all the spaces we were visiting.  At the end of the tour, she gave us her business card.  I emailed her copies of the photos I took during CoNA, and she was very thankful for them and happy that I had had such a good time touring her ship.

The USS John C. Stennis deployed shortly after CoNA, and I started following them on Facebook to keep up to date on the happenings aboard the ship that I had just toured.  In October of 2011 they were coming home.  On Facebook they announced that when they got home they would be doing a Tiger Cruise.  When I saw this, I pulled out the PAO's business card and decided to write her an email.  In my email I asked her if media could be part of the Tiger Cruise, or if it was just limited to friends and family.  I already knew the answer, but I asked anyway.  In her reply email she confirmed what I already knew, Tiger Cruises are limited to friends and family only.  Then, there it was, she asked me a question that I didn't know if I would ever be asked.  She asked me if I wanted to take part in a media embark.  Well, yes, of course I did!  I replied to her to let her know that I was very interested in a media embark.  She then copied me on an email to the PAO for the Commander, Naval Air Forces.  The PAO for the Commander, Naval Air Forces then replied to me to let me know that I was officially on the list for a 24-hour, media embark aboard one of the four Pacific carriers.  There it was, that's it, I was officially on the list!  It was October of 2011, and I was looking forward to the experience of a lifetime!  The PAO did inform me in his email that it would be at least six months before my embark.  Six months, who cares, I can wait that long.

The six months flew by, and I was eagerly awaiting my email letting me know it was time to embark, but that email didn't come.  Six months turned into a year, one year to two, two to three, and three and a half years later, in April of 2015, the email arrives in my inbox.  On April 7, 2015, I received an email asking if I am available to embark on a US Navy aircraft carrier on April 30th.  Well yes, of course I am, I'm available to drop everything to do this.  The following day I received my official invite.  The invite informed me that I would be embarking aboard the USS John C. Stennis (CVN 74) and gave me some of the details of the embark (i.e. cost, program details, embark details, and why the Navy hosts these embarks).  The next step was to go to the Navy's embark website to start the registration process.  The registration process allows the program managers to evaluate/screen my participation prior to the embark.  The registration form asks questions about my contact information, next of kin, health history, and required me to agree to specific waivers.  The waivers basically discussed the dangers of embarking aboard an active aircraft carrier, and made me agree that I understood the dangers.  Of course I understood the dangers (I know a little about how an aircraft carrier operates), but it was worth putting my life on the line to witness aircraft carrier operations firsthand.  After all, I knew the US Navy would do everything in their power to keep us safe during the embark.  About a week and a half later I received an email that stated, "Thank you for submitting your embark profile under the Commander Naval Air Forces Distinguished Visitor Embark program.  This email confirms your participation for the overnight embark aboard the aircraft carrier, USS John C. Stennis (CVN 74)."  That was it, the approval, the final piece of the puzzle.  I was going!

Source (header photo): US Navy (taken while I was embarked aboard the ship)