US Navy Aircraft Carrier Embark (Part 1 of 4) - The Dream 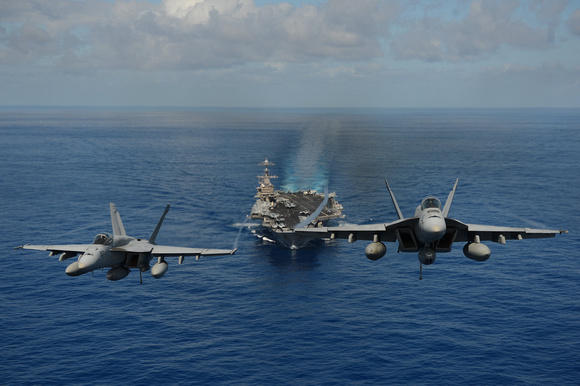 As far back as I can remember, I have loved Naval Aviation.  I'm sure this had something to do with the movie Top Gun coming out when I was nine years old.  I knew that when I grew up I wanted to be a fighter pilot, just like Maverick.  Unfortunately, this was not the course my life would take.  I thought about enlisting in the Navy out of high school, but that wasn't meant to be either (that decision is actually one that I regret).  It has always been a dream of mine to be on an aircraft carrier, out at sea, with flight operations going on.  I have always felt that this would be the greatest place to see Naval Aviation take place.

Back in the early '90s I was fortunate enough to tour the USS Ranger (CV 61) while it was docked at North Island.  It was right after the first Gulf War, and the USS Ranger would only go on one more cruise after that, before the US Navy retired her.  It was a great tour, and included much of the ship.  But, the ship was tied up to a dock, and there was certainly no flight ops to be seen.  On this same trip to San Diego, California, I was able to see the air show at Miramar.  Back then it was still the home to the US Navy's Fighter Weapons School (TOPGUN), and I was able to see the Grumman F-14 Tomcat put on an amazing demonstration.  This only fueled my love of Naval Aviation.

In 1999, while visiting a friend in Seattle, Washington, I was able to take a tour of the USS Carl Vinson (CVN 70).  There wasn't much to be seen, because the ship was hosting thousands of guests while she took part in Seattle's Seafair that year.  They had many exhibits in the hangar bay, and then they took people to the flight deck on an aircraft elevator.  It was a quick tour of a massive ship, and it only continued to fuel my love of Naval Aviation.

In 2005 I decided to get a camera and see if I had any talent as a photographer.  It turned out that I did seem to have an eye for photography, and photography quickly turned into a passion.  I have always enjoyed photography, I had even taken some classes on photography technique and how to develop film and photos.  From 2005 to 2009, as I was developing my passion for photography, I made the decision that I wanted to do more aviation photography.  In 2009 I Co-Founded the Arizona Aviation Photographers (AzAP) with my good friend, and fellow photographer, Joe Copalman.  We both have a passion for photography and aviation, mainly military aviation.  In late 2009 AzAP made contact with the Public Affairs Officer, Michelle Dee, at Naval Air Facility El Centro.  I knew that they were hosting large photocalls, and I wanted to get AzAP involved with them.  AzAP has been participating in the NAF El Centro photocalls ever since.  Being able to see Naval Aviation this up close only continued to fuel the fire engulfing my love of Naval Aviation.  Over the years Michelle Dee and I have become great friends.  She has helped open many doors within the Navy for me, allowing me to pursue my love of Naval Aviation and photography.  Our friendship continues even now, although she is no longer the PAO at NAF El Centro.  Joe and I remain good friends, and we are both still very active within the leadership of AzAP.

In 2011 I was able to attend the Centennial of Naval Aviation (CoNA) at Naval Air Station North Island.  It was awesome to see so many different Navy aircraft all in one place.  During my visit I was able to tour the USS John C. Stennis (CVN 74).  This was an incredible tour, and I was able to see much of the ship.  A third tour of a third aircraft carrier (and this time I had a camera!), I didn't think it could get much better than this and my love of Naval Aviation continued to grow.

Even after I attended CoNA I didn't know how I would ever get on one of these awesome ships while she was out at sea conducting flight ops.  I wasn't sure it would ever happen for me.  How was I ever going to be able to realize my dream?  How was I ever going to become "Distinguished" in the Navy's eyes to warrant an embark?  As it turned out, I wouldn't have to wait long to find out.

Up next, US Navy Aircraft Carrier Embark (Part 2 of 4) - The Approval.