US Navy Aircraft Carrier Embark (Part 3 of 4) - Day One 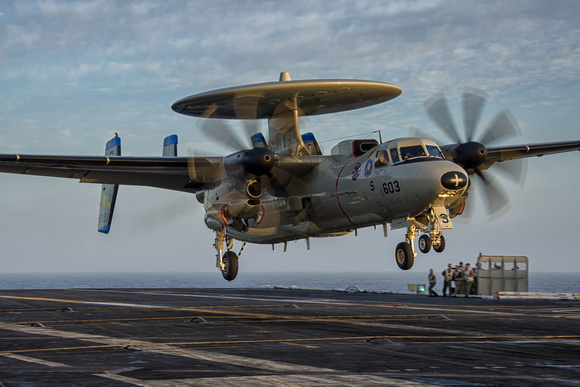 I drove to San Diego, California the day prior to my embark.  I had to be in the visitor parking lot at NAS North Island no later than 8:15am, the day of the embark.  There were only going to be three media photographers on this embark, including me.  The three of us were all there on time, and at 8:15am our escort arrived.  He gave us parking passes and escorted us on base to the NAS North Island Air Terminal.  This is where we would be catching our flight out to the carrier.  We checked our bags and got in his van to head over and see the PAO for the Commander, Naval Air Forces.  The PAO gave us a briefing on Naval Aviation covering aircraft carriers, flight operations, safety, aircraft, and strike groups.  After the briefing it was time for a quick lunch and then head back to the Air Terminal for our briefing with Fleet Logistics Support Squadron 30 (VRC-30) "Providers."  They instructed us on the safety gear we would have to wear and a bit of what to expect on the flight.  We would have to wear a horse collar and cranial during our flight out to the ship.  With our gear on, it was time to head out to our Grumman C-2A Greyhound, or COD (Carrier Onboard Delivery), aircraft for our flight out to the ship.  We boarded the aircraft and strapped into our rear-facing seats.  There are only two small windows, but I was lucky to be sitting near one of them.  The crew told us that when we were about 10 seconds from landing that they would waive their arm over their head and shout, "Here we go, here we go, here we go!"  That was to get us ready for the trap.  It was time, and we were off, we were flying out to the USS John C. Stennis!  We had an overhead time of 1:30pm, and we were a little early.  We circled the ship about five times before it was our turn to land.  We lined up, and we heard them shout, "Here we go, here we go, here we go!"  My heart was pounding, but I was ready.  I could tell the COD was moving around to get the perfect line.  The throttles were moving back and forth (you could hear it in the engines) for the perfect airspeed.  Then, instead of landing, the engines revved to full power and we were waived off.  I don't know exactly why, but we would have to do it all over again.  A minute or so later, the COD is back on final.  My heart is still racing, and we hear them shout, "Here we go, here we go, here we go!"  I look out the window, and this time I can see flight deck, we're landing!  Hook and tires thump, then almost instantly, you're stopped.  You are thrown back into your seat as the COD experiences extreme deceleration from 105 mph to 0 mph in two seconds.  What a rush!  The wings fold back, the cargo doors open, and you taxi over next to the Island.  Looking back, with the doors open, you can see the flight deck, you can see all the different colored shirts, and you can see the ocean.  It's a reality, you have just made your first trap aboard a US Navy aircraft carrier, and the adventure embarked aboard is about to begin.

Once off the COD we were quickly taken off the flight deck and into the ship.  We turned in our horse collars and cranials and were taken to DV Row.  DV, or Distinguished Visitor, Row is where our staterooms were located.  Since there were only three of us, we were each given our own stateroom.  We were given keys to our staterooms and shown the bathroom we were to use, around the corner and down the hall.  Our stateroom keys also worked the bathroom door.  Our bags were being unloaded and would be brought to the media room, which was our next stop.  Our bags were waiting for us when we got there.  Here we were given a safety brief by the ship's Safety Officer, and we were issued cranials and a float coat.  We were also introduced to our escorts.  My escort was on a two-year exchange, he is normally a Lockheed P-3C Orion pilot.  Our escorts were yellow shirts, or shooters.  These guys are the ones that launch the aircraft.  We each had our own escort which would allow us to go anywhere we wanted on the flight deck, we didn't have to stay as a group.  Once suited up and with camera in hand, I followed my escort to the flight deck.  The ship was currently launching aircraft, and once up on the flight deck my escort asked me where I wanted to go.  I decided to start at the ship's Point.  The Point is next to Catapult 1 along the starboard edge of the flight deck.  I was pretty nervous, after all there were those waivers I had to agree to.  There was a Boeing F/A-18F Super Hornet under tension and hooked to Cat 1 when we got to the Point.  I stopped in line with the Jet Blast Deflector to photograph this launch, but once the aircraft went to full power I realized this was not the best place.  Since I was being blown by the jet's exhaust I decided to stay put for this launch and just weather the storm.  I moved forward for the second launch.  After these first couple of launches, I lost my nervousness.  I could see that the US Navy did everything in their power to keep everyone on the flight deck safe. 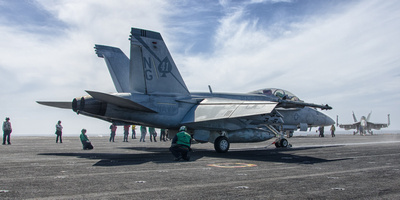 After a couple of launches, it was time for recovery.  The launch/recovery cycle runs about every 90 minutes, with around 12 (what we saw) launches and then around 12 recoveries.  As we walked from the the Point to our next location, it was amazing to see how much the ship was pitching in the ocean.  You could see the stern (Fantail) pitch up and down, it was also apparent when looking from the stern to the bow.  When you see how much the ship pitches, you can truly understand how skilled Naval Aviators are at landing their aircraft on the ship.  We moved over to the ship's area called The Street, this area is next to the ship's Island.  The main rule of safety aboard the carrier is; DO NOT cross the red/white foul line.  The red/white foul lines could only be crossed when the launch/recovery cycle is complete.  From The Street we were close to the Arrestor Cables, and it was a great spot to watch recoveries.  From The Street we were easily able to move to the ship's Junk Yard and Patio, which is at the stern of the ship.  These three areas gave great vantage points for the recovering aircraft.  This first recovery had three aircraft that were working problems.  I never found out what the problems were, but only two of the three aircraft recovered to the ship.  The third aircraft diverted back to land.  These problems delayed the entire recovery process. 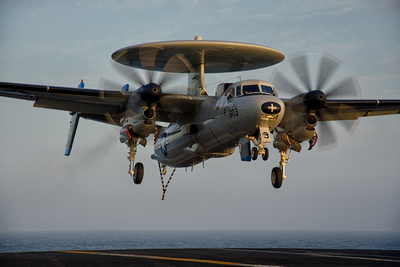 After the recoveries were complete it was time for the rescue helicopters to come in to refuel and swap crews.  They do this along the port edge on the ship's Waist Catapults.  There were three helicopters out, and all three of them came in at the same time and then all three departed together. 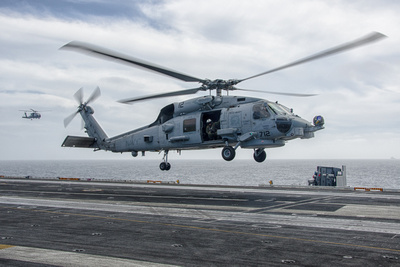 After the rescue helicopters departed, it was time for another launch/recovery cycle.  We moved forward to the ship's Crotch.  The Crotch is on the port side of the ship's bow.  From this area you can see launches from both the bow and the waist.  When in this position, the launches from the waist go right past you.  I struggled taking photos from here, I think I ducked for every launch.

After launches were complete, we went to the ship's Finger.  The Finger is located just forward of the LSO (Landing Signal Officer) Platform.  I was able to watch an entire recovery from here.  It was cool to watch the LSOs working to get every aircraft back safely aboard the ship.

It was now time to get the group back together to tour the Bridge and meet the Captain.  The Captain, CAPT Michael Wettlaufer, Commanding Officer of the USS John C. Stennis (CVN 74), was awesome.  He took the time out of his busy afternoon to talk with us, and to make sure that we understood that an aircraft carrier isn't just about the aircraft.  It's truly about the crew working together as a team to make sure the entire ballet is safe and goes according to plan.  CAPTAIN Wettlaufer is very proud of his ship and his entire crew.  While on the Bridge, we were also able to watch more launches and recoveries, and be able to see the aircraft tracking around the ship on their displays.

After touring the Bridge, it was time for dinner with the ship's XO (Executive Officer).  CAPT Kavon Hakimzadeh was extremely nice and was more than willing to answer all of our questions and spend some time with us.  He reiterated the importance of teamwork aboard the ship.  After dinner, it was back to the flight deck for more launches and recoveries.  The sun was starting to set, and we were all looking forward to taking photos on the flight deck with the golden light.

Since the sun was now set, only leaving a beautiful color in the sky, it was time to re-join the group and head up to Vulture's Row.  From here we could look down on the flight deck and watch all the action.  They were preparing the flight deck for a night launch and recovery.  Aircraft were starting, taxiing, and being towed into position.

Once it was completely dark, it was time to meet the Admiral.  RDML Ronald Boxall had wanted to be a Naval Aviator, but that wasn't his destiny.  He was meant for surface ships, and he has done very well there and just loves it.  He has been fortunate enough to fly in just about all of the Navy aircraft, so he sees it as the best of both worlds.

It was now time to head back to our staterooms and call it a day, and what a day it was.  As I sat in my stateroom watching the CCTV live-feed of the flight deck, I reflected on what I had seen during day one and looked forward to what day two would bring.

Below is a flight deck diagram that shows the locations that I mentioned. 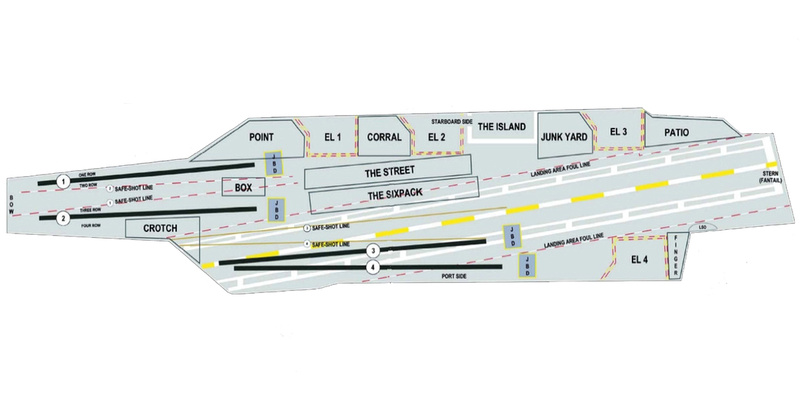