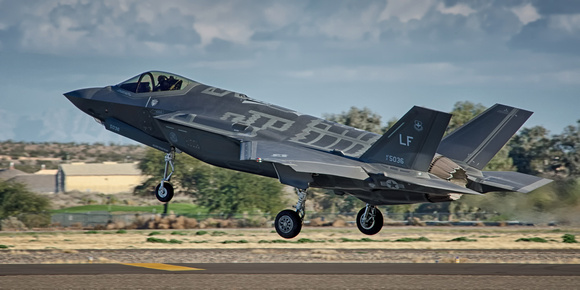 According to Lockheed Martin, on March 31, 2015, the 56th Fighter Wing flew its 1000th F-35 training sortie making it the fastest F-35 wing to reach the 1000-sortie milestone in the Department of Defense.

This is the second historic milestone in as many weeks. Just last week, Luke’s first F-35 student sortie was flown marking a significant step forward for the Airmen at Luke in realizing its new mission -- training the world's greatest F-35 and F-16 fighter pilots. That student was the 56th Fighter Wing commander, Brig. Gen Scott Pleus, who is making the transition from the F-16 to the F-35.

The first official class of student pilots is scheduled to begin at the Academic Training Center, a 145,000-square-foot two story state-of-the-art training center, in May.

"I’m extremely proud of the extraordinary work our maintainers are doing to ensure our pilots have mission ready and safe jets," said Brig Gen Scott Pleus, 56th Fighter Wing commander. “The F-35 is going to be the backbone of the Air Force's fighter fleet for decades to come and Luke will play a vital role in producing the world's greatest, most lethal F-35 pilots. With initial operational capability scheduled to occur late next year, it's important that we get our training program and process dialed in and as efficient and refined as our F-16 training program is so we can help meet the Air Force's scheduled goal."

Pleus also reflected on the years of work that have gone into the F-35 program putting Luke in position to begin training in May.

“Getting to this point hasn’t just been accomplished over the past few months.  It’s really been done over the last few years.  Lots of amazing Airmen who served before us here at Luke are the reason we are where we are with the F-35 program.  What they did back then to set the base up is the reason why we will be so successful training the world’s greatest F-35 pilots." Pleus said.

There are 20 F-35s assigned at Luke, two of which belong to the Royal Australian Air Force, an F-35 pilot training, partner nation.

The photos contained herein are not from Luke's recent milestone, but it has been very cool to see and photograph some of the F-35 flight activity out at Luke Air Force Base.