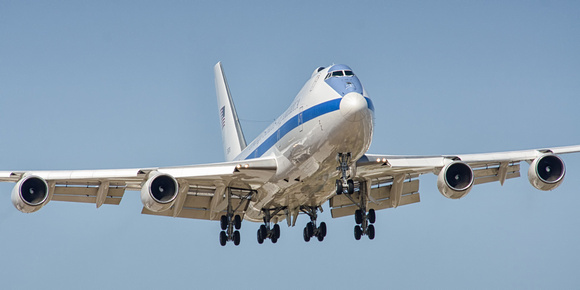 On Monday, April 6, 2015, Secretary of Defense (SecDef) Ashton Carter came to Arizona to give a speech at Arizona State University.  His VIP transport for the day was one of four Boeing E-4B Advanced Airborne Command Post aircraft in US Air Force inventory.  The E-4B arrived at Phoenix Sky Harbor International Airport around 9:40am and departed at 1:00pm.  The SecDef and his E-4B departed Sky Harbor for a week-long trip to Asia.  The SecDef will visit Japan and South Korea for meetings with top government officials and also spend time with U.S. troops.  It was truly amazing to finally see one of these awesome aircraft, and to have the opportunity to photograph both the arrival and departure.

The E-4B program has the project name "Nightwatch," and the origin of the name "Nightwatch" comes from the richly detailed Rembrandt painting, The Night Watch, that depicts local townsfolk protecting a town.  Early in the E-4s service, the media dubbed these aircraft as "The Doomsday Planes."

According to Boeing, the E-4B Advanced Airborne Command Post is designed to be used by the National Command Authority as a survivable command post for control of US forces in all levels of conflict including nuclear war.  For more than 25 years, Boeing has been the Prime Systems Integrator for the E-4B fleet providing maintenance, modifications, and upgrades support.  This support assures that the basic aircraft and on-board command, control, and communications systems are ready to support the US Air Force operational needs.  Over a 25-year period, the cumulative mission capable rate for the fleet has never dropped below 99%.

The huge capacity of the Boeing 747 made it an ideal airframe for the Advanced Airborne Command Post (E-4).  In 1973, the E-4 took over the mission of the EC-135 flying command post aircraft: to provide safe airborne headquarters for military and civilian leaders, including the president, secretary of Defense, and Joint Chiefs of Staff in times of emergency.

The original three E-4As were upgraded to the standard of the E-4B.  The first B model was delivered December 21, 1979, and entered service in January 1980.  By 1985, all aircraft were converted to B models.

The four E-4s carry 13 external communications systems and are designed for missions lasting 72 hours.  Their "hardness" features protect the crew from electromagnetic radiation and the effects of a nuclear blast.

Secondary missions assigned to the E-4B include VIP travel support and Federal Emergency Management Agency support, which provides communications to relief efforts following natural disasters such as hurricanes and earthquakes.

According to the US Air Force, the main deck of the E-4B is divided into six functional areas: a command work area, conference room, briefing room, an operations team work area, and communications and rest areas.  An E-4B crew may include up to 112 people, including a joint-service operations team, an ACC flight crew, a maintenance and security component, a communications team and selected augmentees.

To provide direct support to the president, secretary of defense and the Joint Chiefs of Staff, at least one E-4B is always on alert at one of many selected bases throughout the world.  All E-4B aircraft are assigned to the 55th Wing, Offutt Air Force Base, Nebraska.