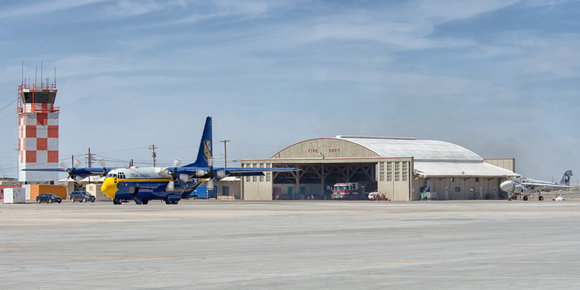 Friday, March 13, would start with an afternoon drive from Phoenix, Arizona to El Centro, California.  I arrived in El Centro around 4:00 pm and checked into my hotel room, which was strategically located next to our favorite burger joint, Burgers & Beer.  After relaxing in my hotel room for a bit, it was time to head to NAF El Centro for that evening's festivities, the Entertainment and Food Festival.  There was to be a night shoot during the festival, which would allow photographers to photograph some of the static display aircraft during the festival's fireworks show. 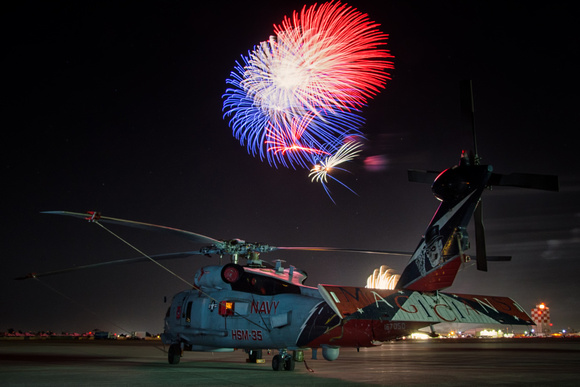 The day of the air show, Saturday, March 14, and this air show is more work than fun/photography.  Back in 2013, the Arizona Aviation Photographers (AzAP) self-published a book about the aircraft operations that take place at NAF El Centro.  All the proceeds from the sale of the book go to helping sailors aboard NAF El Centro.  At the air show we promote the book in hopes of generating sales. 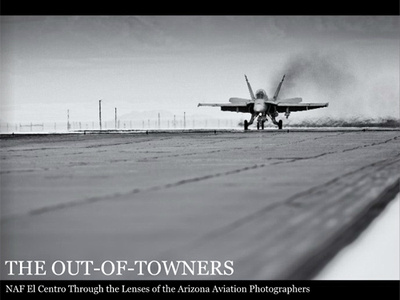 The Out-of-Towners: NAF El Centro Through the Lenses of the Arizona Aviation Photographers

The Out-of-Towners takes the reader on a visual tour of Naval Air Facility El Centro, covering everything from the Blue Angels' winter training to the sailors and contractors who keep the base running to the Navy, Marine, and allied training detachments that visit the base on a regular basis.  The book features the work of twenty-nine AzAP photographers and documents four years worth of visits to NAF El Centro.  Proceeds from the sale of The Out-of-Towners will be used to directly benefit the sailors aboard NAF El Centro.

According to the NAF El Centro Air Show website, the men and women of NAF El Centro are honored to host this open house event and hope that everyone enjoys the show as much as they enjoy bringing it to you.  This year's show offers a wide variety of aircraft, both military and civilian, that will thrill all aviation enthusiasts.  From aerial demonstrations to static displays, there is something for everyone.

I was able to get away from our table for a bit to take a few photos.  One of the demonstrations that I love to see is the British Army Air Corps and their Westland Apache AH Mk 1 demo.  It is always amazing to see what the Apache can do.  I also love to see the Blue Angels' Fat Albert demo.  I am always in awe with the maneuvers they put their Lockheed Martin C-130T Hercules through.  The Blue Angels spend their winters training at NAF El Centro, and their first air show of the season is always the NAF El Centro Air Show.  The Blues put on an awesome performance, and they never seem to disappoint the crowd.

A huge thanks to Commanding Officer CAPT William C. Doster and the entire Public Affairs team, you put on a great air show.  I look forward to seeing you next year for another great air show.