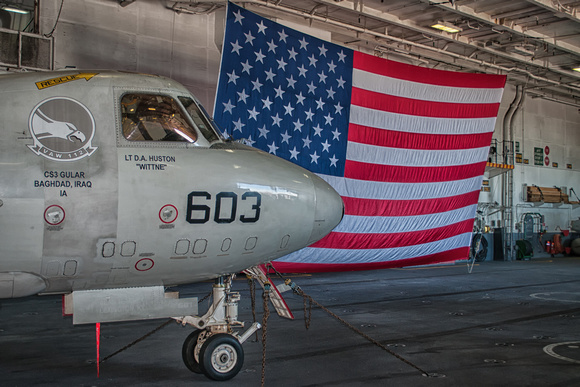 Four years ago today I was a guest on the USS John C. Stennis (CVN 74) for a media tour while she was in port at Naval Air Station North Island.  It is amazing to be able to stand on the flight deck of a ship like this and to be able to see what goes on during their deployments.  It was an incredible experience that has opened more doors for me within the Navy and Naval Air Forces, and I look forward to continuing to work with the Navy and Naval Air Forces to help support their mission.

The mission of John C. Stennis and her air wing (CVW-9) is to conduct sustained combat air operations while forward-deployed.  The embarked air wing consists of up to 10 squadrons.  Attached aircraft are navy and marine F/A-18 Hornet and Super Hornet, EA-6B Prowler (at the time of my tour, now EA-18G Growler), MH-60R, MH-60S, and E-2C Hawkeye.

The USS John C. Stennis (CVN 74) is the seventh Nimitz-class nuclear-powered supercarrier in the United States Navy, named for Senator John C. Stennis of Mississippi.  She was commissioned on December 9, 1995, and her home port is Bremerton, Washington.  She has two Nuclear Reactors capable of speeds greater than 30 knots and allowing the ship to steam more than 1,000,000 miles before refueling.  Her Flight Deck is 257 feet wide and 1,092 feet long, equivilant to three football fields in length and adding up to 4.5 acres.  There are four catapults and four elevators accommodating 70 tactical aircraft.  Her height (keel to mast) is 244 feet, as tall as a 24-story building.  Her two Anchors each weigh 30 tons, and the starboard anchor was inherited from the USS Forrestal (CV 59).  She is capable of accommodating 6,200 Sailors and Marines and serving 18,600 meals per day, with 12,000 eggs served at breakfast alone.

Information provided by Wikipedia and the US Navy.