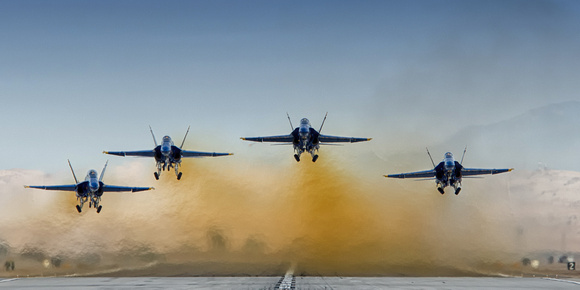 3:00 am came very early on Thursday, February 19, but Rylan and I both shot out of bed with excitement.  It was time to get up, get ready, and be on the road by 4:00 am.  It was time to drive to Naval Air Facility El Centro for the Winter/Blue Angels Photocall!  I had been on the list of photographers attending for a couple of weeks already, but we found out late the night before that Rylan was a possible alternate for a spot that had just opened up.  She was already planning on attending with me, but her plan was to remain outside the fence the entire day.  As luck would have it, we discovered around 8:00 am that she was officially on the list and would be able to attend the photocall with the rest of us.

We arrived outside the NAF El Centro fence around 7:45 am and met a couple of friends that were already there.  It was time to stake our claim near the hay bales for a spot to photograph the Blue Angels during their morning practice.  As time got closer to the Blue Angels' launch, more and more photographers showed up all looking for a prime spot to watch and/or photograph the morning practice.  The morning flights started with Fat Albert departing and heading back to MCAS Yuma.  Fat Albert didn't do any if their air show routine, but it was good to see them.  Fat Albert is not normally at NAF El Centro when we are there for the photocall, Fat Albert does their training at MCAS Yuma.  Shortly after Fat Albert's departure, the Blue Angels took to the sky starting with the Diamond and then the Opposing Solos.

We met at the main gate around 11:00 am to be checked off the official list of attendees and to be driven on base by the Public Affairs team.  We then were able to talk with the executive officer and go over the safety briefing before being driven out to show center to watch another Blue Angels practice.  After this second practice we made our way over the the Combat Aircraft Loading Area (CALA) where we were able to photograph the Marine Corps and some of their UH-1Y Venoms, AH-1Z Vipers, and a AH-1W SuperCobra.  This was all very exciting, especially since we have never spent any time out at the CALA during previous photocalls.  It was then off to the end of the runway and the LSO Shack to spend the remainder of the afternoon.  The airfield was pretty light with training flights, so the control tower was directing aircraft down their runway to put on a show for the photographers.

It was another awesome photocall, and any day at NAF El Centro is better than a day in the office!  Our sincere thanks to everybody that helped in putting this photocall together, especially the PAO shop, the CO, and the XO of NAF El Centro.