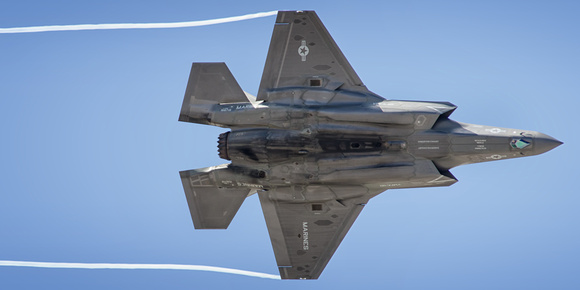 Saturday, February 28, would be another early morning for Rylan and I.  With the alarm going off at 3:00 am, it was time to get ready to be on the road by 4:00 am en route to Yuma, Arizona and the 2015 MCAS Yuma Airshow.  We have always enjoyed the Yuma Airshow, and this would be our third time attending in four years.  We always look forward to the military displays, especially the McDonnell Douglas AV-8B Harrier II.  It is always impressive to see what that, and all the aircraft, can do.  This would be an out-and-back trip for us; drive to Yuma in the morning, attend the airshow, and drive home that evening.  It would make for a long day, but it would be worth it.

According to the Yuma Airshow website, the Yuma Air Circus, the theme for the 2015 Yuma Airshow, will attract spectators from all over the country.  The event will encompass civilian air acts, modern aircraft displays, live air performances, and more!  This wasn't an aviation event that we were going to miss, and we made it to Yuma with time to spare.  We got in line with all the other vehicles about 30 minutes before they opened the gate.  We patiently waited for the gates to open, and then we were able to park on the MCAS Yuma Combat Aircraft Loading Area (CALA).  They used the CALA for general parking, and bussed everyone to the flight line.  Since we were fairly early we had plenty of time to visit the different vendors and check out some of the static display aircraft before the beginning of the show.

The show started with the Marine Corps Drum & Bugle Corps playing music and the Misty Blues Skydiving Team dropping in with the American Flag.  We were then treated with Shockwave, a jet truck that can speed down the runway at an impressive 375 miles per hour.  We watched the Search and Rescue (SAR) demo, and watched the Marines put their Bell HH-1N Iroquois into action in a simulated search and rescue mission.  Gene Soucy and his Grumman Showcat then put on an amazing performance, and we would see him again later with wingwalker Teresa Stokes.  The MCAS Yuma aggressor squadron, Marine Fighter Training Squadron 401 (VMFT-401) "Snipers," did a few flybys in their colorful Northrop F-5N Tiger IIs.  The Bell/Boeing MV-22B Osprey, McDonnell Douglas AV-8B Harrier II, and Lockheed Martin F-35B Lightning II all put on very impressive demonstrations showcasing their speed and both vertical and forward flight.

After the show was over, we waited around for the crowd to thin.  This allowed us more time to visit vendors and static display aircraft.  Once back in our car it was time for a bite to eat and then to hit the road for our drive back to Phoenix.  But, before we could leave town, we had to visit with our new friend, Marty.  Marty lives in Yuma, and a couple of months ago he emailed me stating that he had been a fan of Ottosen Photography for many years and he would love to meet and visit with us.  We briefly met Marty during the airshow, but we stopped by his home on the way out of town to spend some more time with him.  Marty is the son of a USMC Gunnery Sergeant who served three tours in Vietnam and was active duty for 22 years, he has a sincere love for the Marine Corps, and he is very involved in his community; volunteering both with his church and with veterans.  Marty is awesome, he is now a good friend and we look forward to seeing him again.