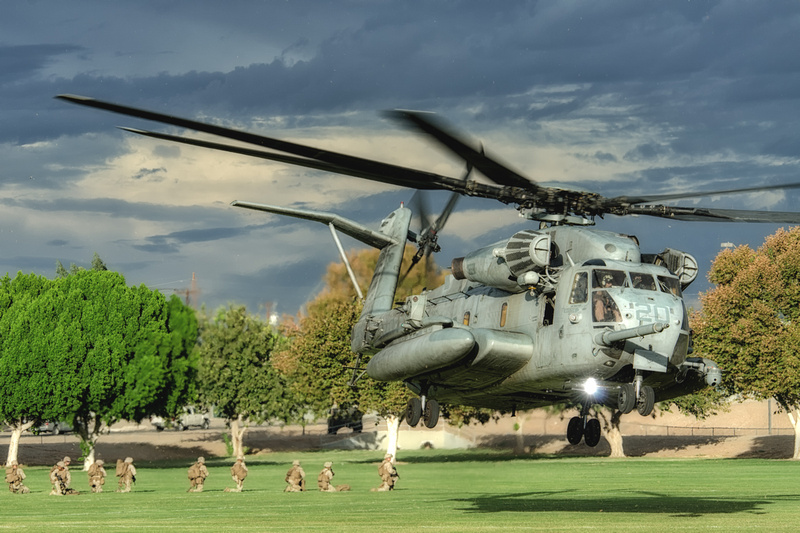 During times of dissension in foreign countries, civilians and medical personnel, from groups such as “Doctors Without Borders,” could be in danger and may require immediate evacuation. Because of their training during the Weapons and Tactics Instructor (WTI) course held at Marine Corps Air Station Yuma, the U.S. Marines are ready for the task.

“Noncombatant evacuation operations (NEOs) are conducted to assist the Department of State (DOS) in evacuating noncombatants, nonessential military personnel, selected host-nation citizens, and third country nationals whose lives are in danger from locations in a host foreign nation to an appropriate safe haven and/or the United States.

NEOs usually involve swift insertions of a force, temporary occupation of an objective, and a planned withdrawal upon completion of the mission.

During NEOs, the US Ambassador is the senior authority for the evacuation and is ultimately responsible for the successful completion of the NEO and the safety of the evacuees. The Ambassador speaks with the authority of the President and serves as direct representative on site.”

Marine Aviation Weapons and Tactics Squadron One (MAWTS-1) has said that the purpose of the exercise is to practice all the tasks Marines would have to do to conduct a short-notice, orderly evacuation, including the transportation, identification, and securing of evacuees.

This exercise simulated the evacuation of civilians and medical personnel, and was held simultaneously from 4:00pm to 9:30pm in Yuma, Arizona and in Twentynine Palms, California. It was conducted in three phases:

None of the Marine aircraft carried live ordnance and the aircraft, which flew in groups of two, operated at a minimum of 500 feet above ground level over the city, except when landing. There was also a strict adherence to all Federal Aviation Administration regulations, and both military police and Yuma Police Department were on site, as well as Military Crash Fire Rescue.

The learning objectives for the MAWTS-1 training exercise are as follows:

The actual exercise consisted of more than 120 marines, and the use of Sikorsky CH-53E Super Stallions and Bell UH-1Y Venom helicopters landing at the park and dropping off Marine infantrymen to secure the Landing Zone (LZ) and establish the evacuation control center.

MAWTS-1 did an amazing job with this highly detailed and well planned exercise.