By pure coincidence, Rylan and I were out at Luke Air Force Base when the first Royal Australian Air Force (RAAF) Lockheed Martin F-35A Lightning II jet arrived.  This one was F-35A A35-002, and was the second F-35A that Lockheed Martin built for the RAAF.  We had planned to spend that day photographing F-16s and F-35s, but it turned into being something a little more special.  We were able to witness a small part of F-35A history.

Nine other nations will be training alongside the United States on the new airframe. Other partner-nations that will be joining the U.S. and Australia in the F-35A training program here will be Turkey, Italy, Norway, and the Netherlands, in addition to Foreign Military Sales countries Japan, Korea and Israel.

Luke will be the central training hub for international F-35A training. In the near future, international and U.S. students will be teamed together learning how to effectively employ the fifth-generation strike fighter.

Australia's training will be conducted in conjunction with the 61st Fighter Squadron. The 62nd Fighter Squadron is expected to stand-up in June, to be joined by partner-nations Italy and Norway. Flight operations for the 62nd are scheduled to begin in September of 2015. 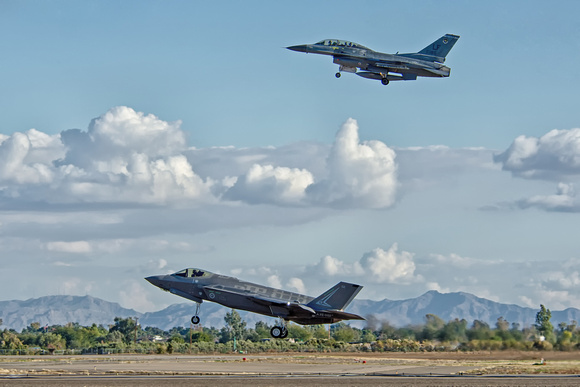