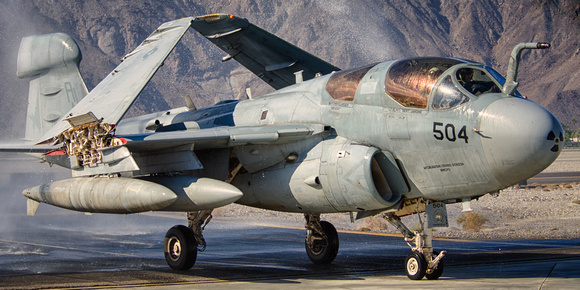 On November 21, 2014 the Navy retired one of its last four Grumman EA-6B Prowlers and put it on permanent loan to the Palm Springs Air Museum.  This aircraft belonged to Electronic Attack Squadron 134 (VAQ-134) "Garudas," based out of Naval Air Station Whidbey Island, Washington.  VAQ-134 is the last operational Navy squadron to fly the Grumman EA-6B Prowler, and they are scheduled to transition to the Boeing E/A-18G Growler in early 2015.

VAQ-134 and this Grumman EA-6B Prowler returned to the United States after being deployed aboard the Nimitz-class Supercarrier, USS George H.W. Bush, in support of Operation Enduring Freedom.  The USS George H.W. Bush recently returned from a nine-month deployment to the Northern Arabian Gulf, where the aircraft flew missions in support of actions against Islamic State militants in the Middle East.

I have always liked the A-6 platform, especially the EA-6B.  I have been very lucky to be able to see these aircraft operate, especially being able to be so close to them.  When I found out about this retirement I just had to go, and it worked out perfectly since I would actually be in El Centro, California already!  I decided to make the quick trip up to Plam Springs to catch this retirement.  And in doing so, my Navy EA-6B photography has come full circle.  My first photo of a Navy EA-6B was of a VAQ-134 Prowler at Red Flag back in 2009, and now with what is most likely my last Navy EA-6B photograph it is also of a VAQ-134 Prowler.

This EA-6B is actually extra special, this aircraft has my friend's name painted on the canopy rail.  After we attended flight school together at Arizona State, he went on to fly Prowlers for VAQ-134. 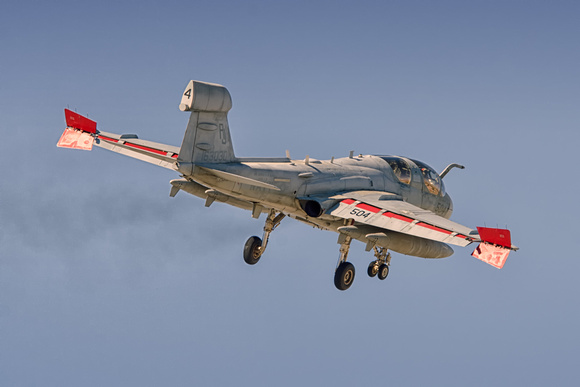