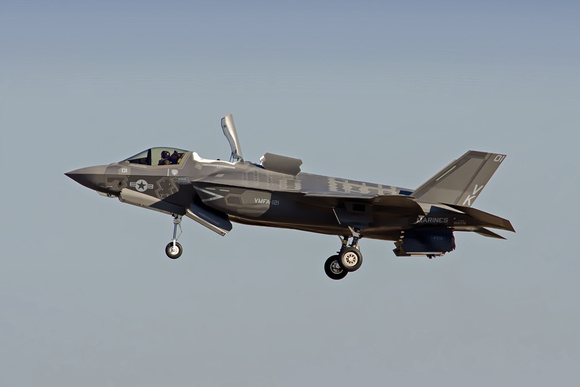 On Thursday, May 9, MCAS Yuma hosted a Media Day for regional media to learn more about the aircraft and mission of MCAS Yuma.  We were able to see aircraft and talk to pilots about what it is that they do at MCAS Yuma and while on deployment.

The F-35B is the world's first supersonic short take-off and vertical landing (STOVL) stealth aircraft, and is a fifth-generation multirole fighter.  The F-35 Lightning II integrates advanced stealth technology into a highly agile, supersonic aircraft that provides the pilot with unprecedented situational awareness and unmatched lethality and survivability.  Increasingly, modern security challenges require wider distribution of forces and capabilities across a range of scenarios.  STOVL capability gives the F-35B the unique capability to operate from a variety of ships, roads and austere bases near frontline combat zones, greatly enhancing sortie generation rates.  The unmatched basing of the F-35B, ashore and afloat, provides more employment flexibility in any scenario (Lockheed Martin). 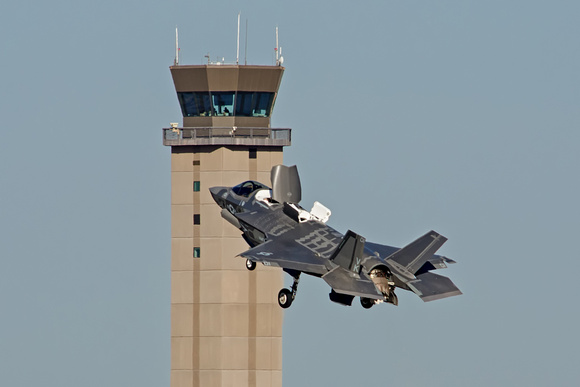 Currently at MCAS Yuma the Lockheed Martin F-35B Lightning II is assigned to Marine Fighter Attack Squadron 121 (VMFA-121) "Green Knights."  On 28 September 2012, LtCol. Jeff Scott took command of the Green Knights from LtCol. Michael Waterman, marking the end of the F/A-18D Hornet days and ushering in the fifth-generation stealth fighter era. This change of command officially moved them from MAG-11 in Miramar, CA to MAG-13 in Yuma, AZ. On November 20, VMFA(AW)-121 was officially redesignated VMFA-121 and accepted delivery of their first three F-35B aircraft to become the first operational F-35 squadron. 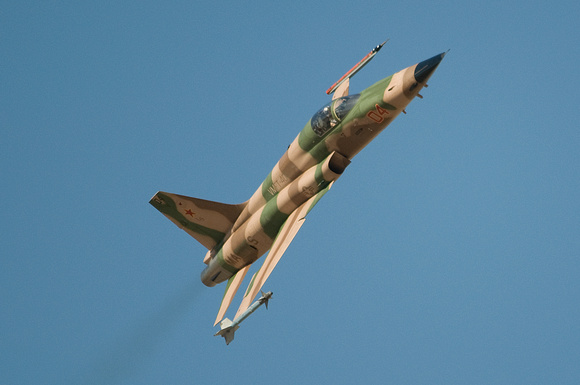 The Marine Corps adopted the F-5 as an opposing forces (OPFOR) "aggressor" for the dissimilar training role because of its small size and performance similarities to the Soviet MiG-21. In this role it has proven a dangerous opponent to more complex aircraft.  At MCAS Yuma, Marine Fighter Training Squadron 401 (VMFT-401) "Snipers" uses the Northrop F-5N Tiger II in the dissimilar training role. 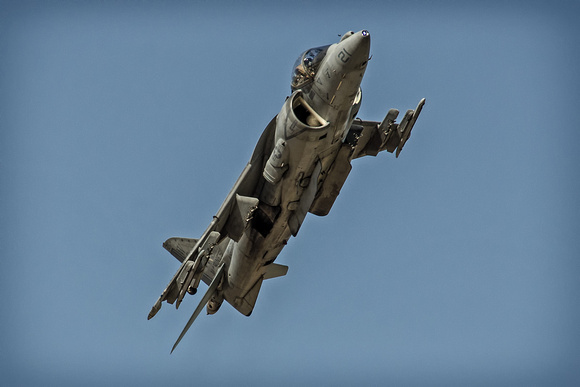 The McDonnell Douglas AV-8B Harrier II is a second-generation vertical/short takeoff and landing (V/STOL) ground-attack aircraft.  AV-8Bs have participated in numerous conflicts, providing close air support for ground troops and performing armed reconnaissance, proving themselves versatile assets. US Army General Norman Schwarzkopf named the USMC Harrier as one of the seven most important weapons of the Gulf War. The aircraft took part in combat during the Iraq War beginning in 2003. The Harrier II has served in Operation Enduring Freedom in Afghanistan since 2001, and was used in Operation Odyssey Dawn in Libya in 2011. Italian and Spanish Harrier IIs participated in overseas conflicts, in conjunction with NATO coalitions. The AV-8Bs are expected to be replaced by the Lockheed Martin F-35B Lightning II, but he USMC is expected to operate their Harriers until 2030.

It was incredible to see the Lockheed Martin F-35B Lightning II in action.  This was the first time I was able to see an F-35B hover, and only the second time I have seen an F-35B in flight.  It was also great to learn more about the Northrop F-5N Tiger II and the McDonnell Douglas AV-8B Harrier II, and their role with the US Marine Corps.


A special thanks to MCAS Yuma and especially the MCAS Yuma Public Affairs shop for making this a great day.