Another Day in LA 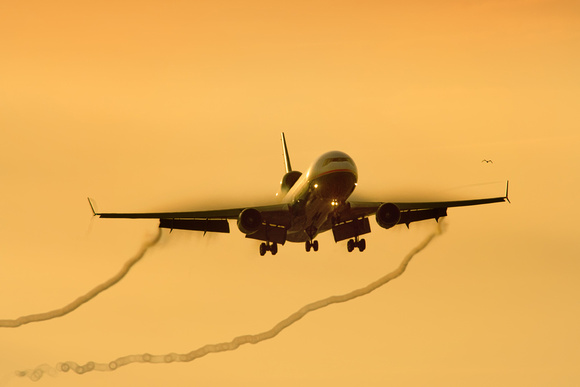 We drove all night and shot all day, when I returned home I had been gone a total of 26 hours.  The four of us had spent over a month planning this trip, watching FlightRadar24 for arrivals, and planning shooting locations.  When it was all over, the first few hours of the morning, shooting around the Westchester In-N-Out, had been the best.  The morning light was amazing, and the marine layer of clouds provided enough moisture in the air to allow for some spectacular vapor which, being from Arizona, we were all very happy to see.

We changed locations in the afternoon in preparation for sunset, but the shots from there had a lot of haze.  There was just too much heat and moisture in the air.  We were hoping that sunset would alleviate some of the haze, but the marine layer returned blocking out the sun and ending our hopes of catching touchdowns in the amazing evening light.

I have now been to LA three times to photograph airliners, and every time has been a learning experience.  All three times I have come away disappointed at my keeper rate.  Just for example, on this most recent trip I took around 850 photos, but only have eight keepers.  I have learned a lot in my trips, and I know that my keeper rate will only increase as I learn about the lighting and shooting locations around LAX.  I'm already in the early stages of planning another trip to LA, and I'm excited see what I get!