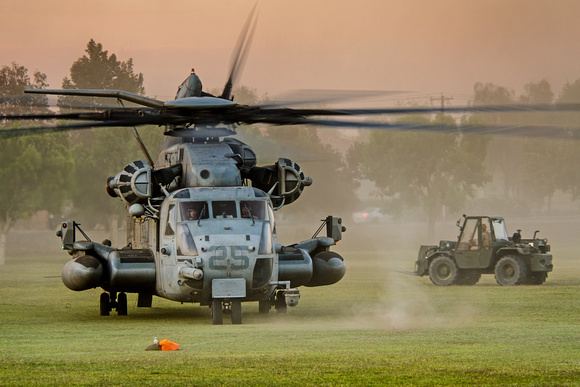 On April 19, Marines taking part in the Weapons and Tactics Instructor (WTI) course participated in a Humanitarian Assistance/Disaster Relief exercise that took place at Kiwanis Park in Yuma, Arizona.  In the past this exercise was a Noncombatant Evacuation Operations training exercise, but this time it was different.

Lance Cpl. Casey Scarpulla wrote, for this specific exercise, students were placed in a simulated scenario which required them to develop a plan to deliver medical personnel, supplies and vital natural resources to sustain people displaced from their communities.  Fixed and rotary wing aircraft were used to support this mission, including CH-53s, UH-1Ns, C-130s and AV-8Bs. The HA/DR was conducted between Marine Corps Air Station Yuma and Kiwanis Park, providing a realistic training environment in a civilian setting to help students become comfortable with executing missions in real-life situations.

There are three main phases in a HA/DR. Phase one is to swiftly insert security forces and drop off medical personnel via helicopter to the site in question. The second phase is to provide aid and shelter to dislocated civilians if necessary and the third phase is to evacuate injured civilians to a safe location.


Lance Cpl. Casey Scarpulla also wrote, in this specific exercise, the security force Marines provided external security, initial screening, and removed any weapons and contraband items from evacuees. They also established an evacuation control center and ran civilian role players through the process of registering, moving them to the appropriate location, searching and screening, and evacuating them.

“(The exercise) shows that Marines aren’t just about combat, they do humanitarian efforts also,” says Captain David Beere, a South Orange, N.J., native and Marine Aviation and Weapons Tactics Squadron One Infantry Instructor for the Ground Combat Department. “The Marine Corps is America’s force of readiness, and we are called to handle all sorts of missions - whether its disaster relief in a place like Haiti, or a full on combat operation in a place like Afghanistan.”

An example of a recent HA/DR was after the flooding in Pakistan in 2010 where over 20 million people were displaced due to flooding, and over 2,000 people died. United States Marines from the 15th Marine Expeditionary Unit and 26th MEU were able to provide medical aid and emergency food items to assist those impacted on the ground while attached to U.S. Naval vessels at sea.

It is always amazing to see the huge CH-53Es operating within a city park, and this exercise has quickly become one of my favorite to attend every year.

Special thanks to MCAS Yuma Public Affairs and MAWTS-1 for all the help during this WTI cycle.