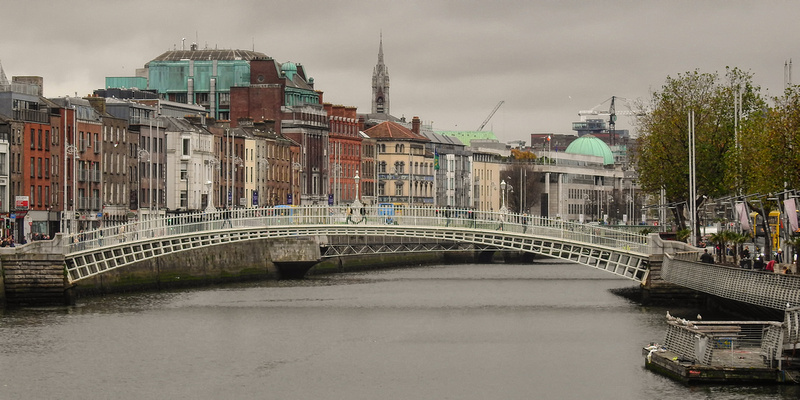 To celebrate Rylan's Birthday this year, we planned a trip to Ireland.  We spent a week there, staying in Dublin City, but taking a couple of days to travel to other parts of Ireland too.  We found the Irish people to be some of the nicest, most friendly people we have ever met.

We left Phoenix, Arizona on Friday, November 9, and arrived in Dublin, Ireland the morning of Saturday, November 10.  After arriving at our hotel, the Academy Plaza Hotel, it was time for breakfast and to spend some time exploring Dublin City.  We had breakfast at Murray's Pub, which was conveniently located just around the corner from our hotel. 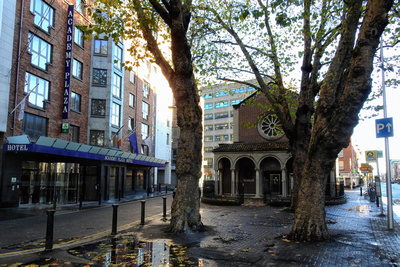 After breakfast we walked down O'Connell Street and found our way to the Molly Malone Statue in front of St. Andrew's Church.  This statue would be our meeting location on a couple of early mornings for our trips to both Blarney Castle and Belfast.  After locating the Molly Malone Statue it was time to make ourselves familiar with the Temple Bar area.

Sunday was Rylan's Birthday, and we started the day by heading to the Poolbeg Lighthouse.

After our walk along the Great South Wall, we stopped at a small beach to take some photos for our Dublin Belle collection.  That afternoon we visited Peterson of Dublin for a pipe.  Rylan really wanted a pipe for her Birthday, and she found the exact one that she wanted at Peterson of Dublin.  So we made our way there, and I bought her a Birthday present.

That night we spent the evening in Temple Bar, visiting The Oliver St. John Gogarty, Leo Burdock, and The Temple Bar Pub. 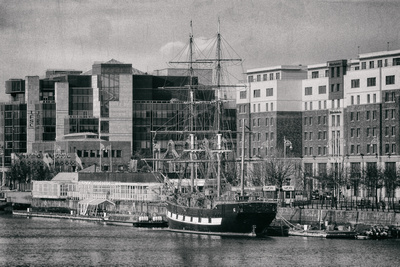 Dinner that night was at the Hard Rock Cafe Dublin, and the customer service there was nothing short of amazing! 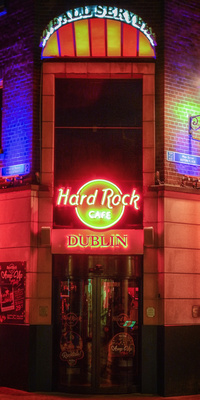 Tuesday was our first day trip, this one would take us to Blarney Castle.  We met our group at the Molly Malone Statue, boarded our bus, and headed out of Dublin City.  Our first stop was Blarney Castle, and a hike to the top to kiss the Blarney Stone.  When we arrived at the top of the castle, we found that the Travel Channel was filming for Legendary Locations.

Our next stop was Cahir Castle.

Wednesday we woke up early to head to Temple Bar to work on our Dublin Belle collection.

That night we had a very good and relaxing dinner at Madigan's on O'Connell Street.

Thursday we were off to Belfast, Northern Ireland, UK.  It was another early morning meetup to meet our group, board our bus, and make our way out of Dublin City.  We learned about the history of Belfast, and we were able to see some of the Belfast Peace Murals and sign the Belfast Peace Wall.  Rylan thought it was an honor to be able to sign the Peace Wall.

We then headed to Belfast City Centre, where we were able to do a bit of shopping and grab a bite to eat.  We had lunch at Cafe Parisien Belfast, where the food was amazing.  After lunch we headed to the Titanic Quarter to visit the HMS Caroline and Titanic Belfast.  Both were very cool experiences, and Rylan found four more four-leaf clovers at Titanic Belfast.

Friday was our last full day in Ireland, and we spent it visiting some of our favorite locations.  We spent a good amount of time having lunch at the Hard Rock Cafe Dublin, and for dinner we found ourselves back at Madigan's on O'Connell Street.

On Saturday we went back to Dublin Airport, flew to London's Heathrow, and caught one of Air Canada's Boeing 787-9 Dreamliners back to Toronto.  The Dreamliner experience was very nice, and was by far the best flight of our trip.  We spent the night in Toronto, and made it back to Phoenix, Arizona on Sunday.

During our time in Dublin, Rylan reached out to help the homeless and was able to connect with Dublin Homeless Awareness.  She wanted to help because the people there are so beautiful and she felt a connection to them, and she wanted to do something, even if it was from afar.  After being back only a few days, Rylan sent out her first package of hand-crafted Love Letters and Flower Fairy Wishing Stones for the Christmas Party for the Children in Emergency Accommodation.

It was an incredible week and in the end, the food, the drink, the people, and everything we experienced all made for a trip that we will never forget, and a place we will always want to come back to.