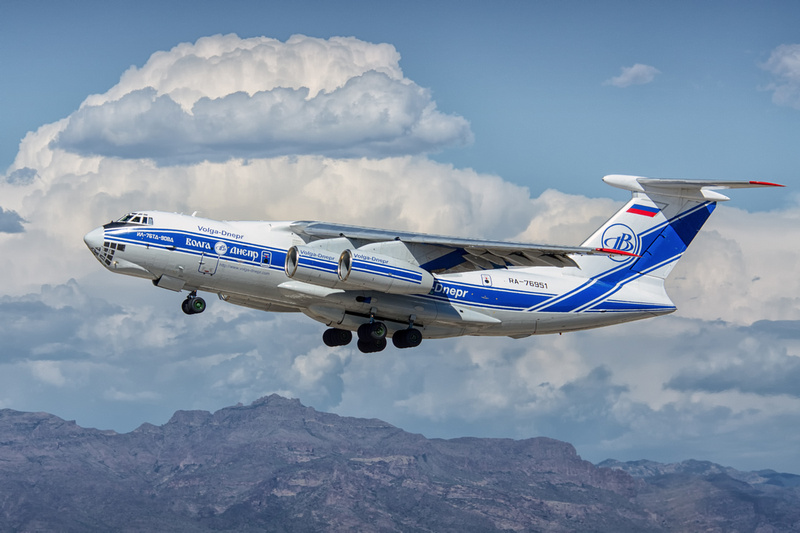 2017 was a great year for Ottosen Photography!  We took thousands of photos, went on quite a few trips, and celebrated our 10th Anniversary.

The year started with a trip to Naval Air Facility El Centro for their Winter/Blue Angels Photocall.  We photographed the Blue Angels' during both their morning and afternoon practices was over, and spent time out at the LSO Shack and the east end of the runway.  At the LSO Shack, we had a few few hours to photograph all the comings and goings at NAF El Centro.  This spot is such an amazing place to photograph, and during photocalls it's great to see old friends that you don't get to see very often.  We saw a lot of action by Strike Fighter Squadron 106 (VFA-106) "Gladiators" that went well into the evening.

We also had an opportunity to visit Aluminum Overcast down near Tucson at Marana Regional Airport (AVW, KAVQ, AVQ).  Aluminum Overcast was delivered to the U.S. Army Air Corps on May 18, 1945.  Although delivered too late to see action in World War II, the airplane has an interesting history.  Purchased as surplus from the military inventory for a mere $750 in 1946, the airplane has flown more than one million miles.  It has served as a cargo hauler, an aerial mapping platform and in pest control and forest dusting applications.  The airplane's return to its military roots began in 1978, when it was purchased by a group of investors who wished to preserve the heritage of the magnificent B-17.  The group, "B-17s Around the World," was headed by Dr. Bill Harrison.  Their goal was to return the B-17 to its former glory.  The economic reality of simply maintaining a vintage bomber, let alone the cost of restoration, prompted the group to donate the B-17 to EAA in 1983.  Since that time, an extensive program of restoration and preservation was undertaken to ensure Aluminum Overcast would be a living reminder of World War II aviation for many years to come.  The restoration has taken more than 10 years and thousands of hours by dedicated staff and volunteers at EAA’s headquarters in Oshkosh, Wisconsin.  Aluminum Overcast proudly carries the colors of the 398th Bomb Group of World War II, which flew hundreds of missions over Nazi-held territory during the war. Aluminum Overcast commemorates B-17G #42-102516 which was shot down on its 34th combat mission over Le Manior, France, on August 13, 1944.  Veterans of the 398th helped finance the bomber's restoration. 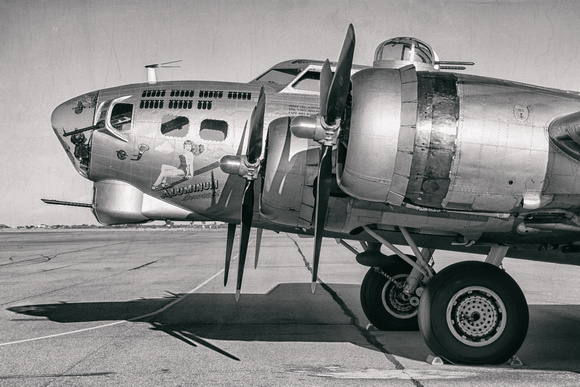 We had the opportunity to attend the 2017 Planes of Fame Air Airshow.  This is my favorite airshow of the season, and we were both very excited to attend.  The weather was cool and the skies were cloudy, and the show officially kicked off with a gaggle of Planes of Fame's own warbirds flying in formation to celebrate their 60th Anniversary.  Here's what Planes of Fame had to say in their Air Show 2017 Recap:

2017 also saw the creation of our new collection, The Art of War.  This collection was a complete accident, we never had any intention of creating this one and it only came about through a recent visit to Pima Air and Space Museum in Tucson, Arizona.  During this visit we were able to tour their Restoration Hangar as see two Bell OH-58D Kiowa Warriors that they had recently received and were getting ready for display.  They both had the Punisher logo painted on them and I wanted to get a photo of the helicopter with the Punisher logo, but I was struggling to get a good angle on the entire aircraft.  In all honesty, I always seem to struggle when taking photos in a museum, I always have trouble finding that great angle that reduces background clutter.  This time I decided to get in close to capture the Punisher logo and I just let everything else fall into place.  The following image is the result, and it's the image that started this new collection. 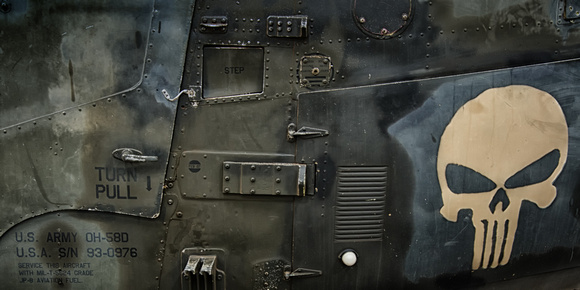 There was even an opportunity to photograph one of our favorite cargo planes for the first time, a Russian Ilyushin Il-76TD-90VD operated by Volga-Dnepr.  This particular aircraft had made an overnight visit to Phoenix-Mesa Gateway Airport, and luckily a few friends had made me aware of it being there and of its departure time.  I wasn't about to miss this opportunity, so I headed out to "Willie" for some photography. 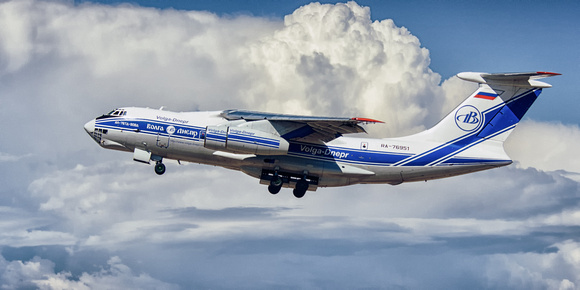 Later in the year, we found ourselves back in Palm Springs and Chino to visit their museums and take some photos.  We were also there to celebrate Rylan's Birthday, and it was a fun weekend for both of us.  First we stopped at Flo's Airport Cafe for breakfast.  Flo's is amazing, and is a must when in Chino.  Rylan had never been to Flo's, and she thought Flo's was very country, fresh tasting.  After breakfast, we were off to Planes of Fame.  It was awesome to spend a few hours at the museum, and Rylan was so impressed that she was, literally, knocked off her feet!
After Planes of Fame we decided to hit the beach.  We decided to head to the city of Newport Beach and visit beautiful Little Corona del Mar Beach.  This is one beach that we would love to visit again.
The next morning we visited the Palm Springs Air Museum.  We both really enjoy this museum, and try to visit whenever we are in Palm Springs.  This time they had recently opened a new hangar, and it was great to see that their Grumman EA-6B Prowler was finally on display.  I was at the museum when the US Navy delivered the aircraft to the museum, and it was very cool to see the name of one of my friends on the canopy rail.  Blake and I went to flight school at Arizona State University together.

Our final trip of the year was to the NAF El Centro Fall Photocall.  During our four hours out at the runway, we were able to photograph a lot of aircraft movements and many of those movements were unexpected.  While we were expecting Goshawks and Growlers, we were not expecting Venoms and Vipers.  The Goshawks and skids were coming and going on training missions, with the skids carrying live ordinance.  The Growlers were practicing Field Carrier Landing Practice (FCLP), so they just stayed in the pattern and kept beating up the runway.  It turned out to be an awesome Photocall!

We're not quite sure where 2018 will take us yet, but we do believe that we will be taking a small step back from aviation photography.  Our only plan for the year, as of right now, is a trip to Dublin, Ireland.  While we do hope to get out to take some aviation photos, our trip to Ireland is our main priority.  And don't worry, our cameras will be coming with us to the Emerald Isle!