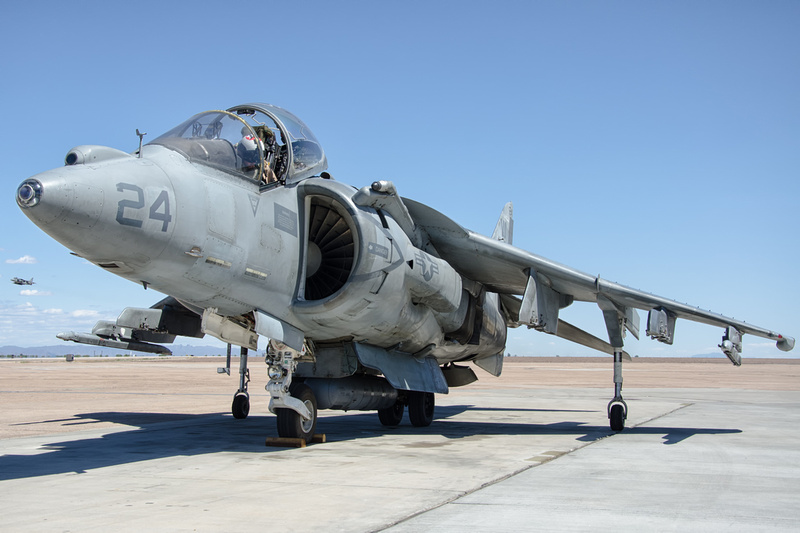 Marine Attack Squadron 311 (VMA-311) "Tomcats" currently employ the McDonnell Douglas AV-8B Harrier II, and are a part of the 3rd Marine Aircraft Wing.  During a recent visit to Phoenix-Mesa Gateway Airport, Rylan and I were able to spend some time with a few of the pilots and take photos as they prepared to depart on another training mission.

The Third Marine Aircraft Wing (3rd MAW) is comprised of Marines, sailors and civilians. We enjoy a climate of trust and cohesiveness that makes our combat organization greater than the sum of its individual parts. As a combat team, we focus on excellence and mission success. We accept nothing less than superior performance, for mediocrity has no place in aviation.

Our high standards of professional excellence are apparent in our conduct and preparation for combat. We are the epitome of professionalism in everything we do: in our work ethic, our grooming standards, in our daily behavior, and while we are enjoying well-earned liberty. We remain combat ready to conduct any mission assigned. We stay fit for duty – physically, mentally, emotionally, and spiritually. Our posture for success sustains us in combat.

We are representatives of the United States of America, of our service, and of our families. Our personal interaction sets the standard by which 3rd Marine Aircraft Wing is judged. We always maintain the highest standards of professionalism and human dignity.

The action, or inaction, of any one individual plays a critical role in our preparation for combat.

Our leadership is proactive, never abusive. We thrive on challenges, seek solutions, and produce positive, timely results. We are always accountable and accept responsibility for our actions. We know the rules and regulations and abide by them. Integrity is our cornerstone, honesty is our guide, and respect for our fellow man is our creed. We will not waiver in our mission to defeat terrorism and destroy those extremists who threaten our way of life.

Excel, demand excellence, set the example, be responsible, contribute to the 3rd Marine Aircraft Wing success and we will make a difference as we defeat the enemies of our great country.

Marine Attack Squadron (VMA)-311 was initially commissioned a fighter squadron on Dec. 1, 1942, at Cherry Point, N.C., flying the SNJ Texan trainers. In April 1943, they received the new Vought F4U-1 Corsair and entered the Pacific Theater where they served with distinction until the end of World War II.

On Oct. 6, 1943, the squadron catapulted from the deck of the USS Nassau to Samoa Naval Air Station, in one of the earliest catapult operations of the F4U. Two days later, VMF-311 flew to Wallis Island and remained there until January 1944.

During America's "Island Hopping" campaign across the Pacific, the squadron's mission was to isolate Japanese forces on the bypassed islands, deny their escape and prevent their use of airstrips. The squadron continued strafing and bombing missions until moving to Okinawa in March 1945, and was the first Marine squadron to use fighter aircraft for dive bombing missions. The squadron, now flying the F4U-1C (a modification which include four 20mm cannons and pylons for 5-inch rockets), downed its first aircraft on April 7, 1945. Combat air patrols were the predominant mission until the war ended.

After the war, VMF-311 moved to Yokosuka, Japan, as part of the occupational forces. The nickname "Hell's Belles" was adopted by the squadron during World War II but was seldom used.

In April 1948, '311 received the first jet aircraft to be introduced to Marine aviation, the F-80A Shooting Star, followed in September by the F9F2 Panther. It was during this time that the squadron acquired the letters "WL" as its tail designator, or “William Love” in the phonetic alphabet used at the time. The evidence suggests that it was this nickname which inspired the heart on the squadron insignia.

With the outbreak of war in Korea, the squadron moved to Pusan, where it flew the first Marine jet combat mission on Dec. 10, 1950, providing close air support for 8th Army units near the Chosin Reservoir. Similar missions were flown despite inclement weather, maintenance problems, and enemy antiaircraft fire. In two and a half years, the squadron amassed 18,851 combat sorties.
Even after the armistice was signed, VMF-311 continued to fly training missions to maintain readiness. It was early in 1957 that VMF-311 began to be referred to as the "Tomcats." This period also brought the new Grumman F9F-8 Cougar, thus upgrading the squadron's capabilities.

On June 1, 1957, the unit was redesignated Marine Attack Squadron-311. This didn't create any organizational problems as the emphasis was simply placed on a mission the squadron had so aptly performed during World War II and Korea. In the summer of 1958, VMA-311 began receiving the Douglas A4D2 Skyhawks, later redesignated the A-4B. The Tomcats began receiving the new A-4Es in mid-1963 and in March 1965 deployed to Japan with 20 A-4Es.

During April 1965, VMA-311 was alerted to prepare to deploy to the Republic of Vietnam. In Vietnam the tempo of operations was intense. Operating from the air base at Chu Lai, the squadron flew 240 sorties flown from May 5-8, 1968, and by September the Tomcats had logged 25,000 combat sorties and were the undisputed pacesetter in what was believed to be a record number of combat sorties for any fixed wing squadron in a single conflict of war.

The squadron flew the A-4aircraft until its return from Iwakuni, Japan, in June of 1988, and was moved to MCAS Yuma along with other MAG-13 squadrons. Prior to its transition into the new AV-8B aircraft, VMA-311 was the proud recipient of the coveted Lawson H.M. Sanderson Award, qualifying the squadron for the 1988 Marine Attack Squadron of the Year by the Marine Corps Aviation Association.

On Aug. 11, 1990, the Tomcats were ordered to Saudi Arabia in support of I Marine Expeditionary Force units deployed for Operation Desert Shield. Operating from the King Abdul Aziz naval air base, VMA-311 was the forward-most fixed wing aircraft unit in theater.

On Jan. 17, the Tomcats became the first Marine squadron to employ the AV-8B Harrier in combat, striking Iraqi positions in southern Kuwait in preparation for the coalition ground offensive. During the Persian Gulf War, the squadron flew 1,017 combat sorties and dropped 840 tons of ordnance on enemy targets. The Harrier was recognized by Secretary of Defense Cohen as one of the three most significant weapon systems in Desert Storm.

Returning to Yuma in April 1991, the squadron was awarded the Marine Corps Aviator Association's Attack Squadron of the Year for
1991. On April 9, 1992, the Tomcats received their first Night Attack AV-8B’s and were formally assigned as a night attack squadron. In May of 1996, Marine Attack Squadron 311 became the sole provider of Harrier support to the 31st Marine Expeditionary Unit. The Tomcats continued their proud history and met the challenge by providing six back-to-back detachments, with the last returning in August of 1999. This commitment is unmatched by any Marine Attack Squadron.

Continuing the Tomcat's tradition of firsts, on 3 November 2001, VMA-311 Harriers attached to the 15th Marine Expeditionary Unit embarked aboard the USS Peleliu and became the first Harriers to fly combat missions in Afghanistan during Operation ENDURING FREEDOM.

In true Tomcat fashion, the Marines of VMA-311 again answered the nation's call as they deployed to the Northern Arabian Gulf in January 2003. Almost 59 years to the day, after VMF-311's first combat sortie in World War II, the Tomcats flew their first combat sortie of Operation IRAQI FREEDOM on 21 March 2003. During the war they dropped 77 tons of precision ordnance destroying or neutralizing 132 Iraqi targets.
VMA-311 deployed three more times in support of Operation IRAQI FREEDOM in subsequent years, with deployments from November 2004 to May 2005, January to May 2007, and March to October 2008.

The Tomcats continue to deploy in support of the Global War on Terror.  As part of Marine Expeditionary Units, VMA-311 is an integral force in the nation’s forward presence around the globe.

3rd MAW and VMA-311 info provided by the US Marine Corps.