US Navy: A Case For Aircraft Carriers And Air Wings 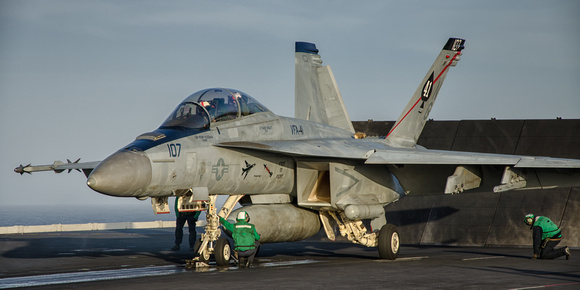 Because of my recent Distinguished Visitor (DV) embark out to the USS John C. Stennis (CVN 74), I receive regular email updates about the US Navy and US Naval Air Forces.  I received another one of these emails just the other day, and it says, Thank you for your past participation as a Distinguished Visitor (DV) aboard a US Navy aircraft carrier.  As a DV, you were afforded a very rare, first-hand look at shipboard life and were witness to the pride and professionalism displayed by the young men and women who serve in our Navy today.  As part of Naval Air Force's ongoing outreach efforts, we thought we would share with you a recently-published Editorial, by Vice Admiral Mike Shoemaker, the current Commander, Naval Air Forces.

Now, I know that you can find this Editorial published elsewhere, especially since I have seen it posted on Facebook, but it is so good that I wanted to share it again, with you, here on Ottosen Photography and include my photos (see slide show at bottom), from my recent DV embark, to illustrate Vice Admiral Mike Shoemaker's points.  After all, bringing awareness to the US Navy and US Naval Air Forces is exactly why I embarked aboard the USS John C. Stennis (CVN 74), while she was underway in the Pacific Ocean with her Air Wing.

Today, more than ever, U.S. national interests require the speed, endurance, flexibility and autonomous nature of the U.S. Navy's nuclear powered aircraft carrier, which deploys, operates and is prepared to fight as part of a Carrier Strike Group (CSG).

The CSG provides our national command authority with options, access and forward presence that allows for a rapid response to a wide spectrum of threats or natural disasters. Even when faced with contested waters and airspace, the composition and maneuverability of a CSG ensures survivability of the carrier while its embarked carrier air wing uses its integrated capabilities to project power, thus enabling the U.S. to continue its role as a key guarantor of peace and stability around the world.

CSGs, typically comprised of a nuclear powered aircraft carrier (CVN) and its embarked air wing, one guided-missile cruiser , a couple of guided-missile destroyers , and a supply ship, train and deploy as a team with well-established integrated tactics, techniques, and procedures that allow for freedom of maneuver in the global commons. Operationally, the combined strength of the CSG remains vastly greater than the sum of its parts. As a complex, joint force multiplier, with command and control and organic logistical capabilities, there exists no comparable way to quickly generate the effects crucial to American diplomatic and economic interests that carrier aviation offers.

Carrier Strike Groups provide access - access often denied or diplomatically slow to attain through other military and civilian channels. CSGs afford options to deny an adversary's objectives, preserve freedom of action, and assure access for other joint and coalition forces. While political dynamics and host nation sensitivities can restrict the use of land-based aircraft in the initial stages of conflict, CVNs and their embarked air wings can reach nearly any spot on the globe without having to ask permission. We continue to live in a turbulent and unsettled world, and the strategic options and flexibility our CSGs provide remain in high demand by our Combatant Commanders around the world.

When the Islamic State of Iraq and the Levant suddenly and viciously expanded across the Middle East in the summer of 2014, and the President needed immediate options to curb ISIL's advance, the George H.W. Bush Strike Group was on station in the Arabian Gulf and ready within 30 hours of being tasked. The Bush CSG was the only strike option on station for the first 10 days of the conflict and remained there for a total of 54 days as the only viable U.S. option until the order was given to conduct air and cruise missile strikes. Since the beginning of Operation Inherent Resolve, in fact since well before 9/11, CSGs continue to be present in that region of the world, with seamless transitions among those strike groups as they rotate in and out.

The continuous forward presence carriers provide around the world comes with a cost. After nearly 14 years of sustained combat operations, Naval Aviation forces must reset and recapitalize in an effort to ensure readiness in the future. The frequency and extended durations of carrier strike group deployments has accelerated the wear on the force and has led to increased maintenance and repair requirements, resulting in lengthened maintenance availability periods. Deliberate planning and resourcing has Naval Aviation on a path to recover our readiness in the coming months and years, ensuring the carrier force is where it needs to be, when it needs to be there.

The value of stability and security operations is often manifested in what does not occur - such as tensions that are quietly defused and do not escalate into armed conflict. In April 2015, while on station in the Arabian Gulf, USS Theodore Roosevelt (CVN 71) transited the Strait of Hormuz to the Arabian Sea, joining other forces conducting maritime security operations off the coast of Yemen to ensure vital shipping lanes remained open and safe. Following Theodore Roosevelt's move, an Iranian convoy transiting toward Yemen reversed course, underscoring the stabilizing effect the carrier force can have overseas. As an agent of American diplomacy, CSGs communicate our nation's commitment to maritime security, regional stability and the uninterrupted flow of goods and services that is critical to continued economic prosperity for all nations.

The value of forward presence acts not only as a deterrent, but also enables rapid response to disasters as demonstrated by USS Ronald Reagan (CVN 76) immediately following the earthquake and subsequent tsunami that devastated Japan in 2011. The carrier produced and delivered potable water for thousands of displaced families, airlifted tons of food and supplies ashore, and conducted search and rescue operations. CVNs, working with allies and partner nations, remain ready to save lives, provide immediate relief, and set the conditions for effective civilian response without relying on damaged or inaccessible ports or airfields ashore. In the next few months, Ronald Reagan will return to Japan, replacing USS George Washington (CVN 73) as the centerpiece of our Forward Deployed Naval Forces in northeast Asia and delivering our most capable Nimitz-class CVN to that critical region of the world.

The Future Of Naval Aviation.

Naval Aviation continues to evolve to out-pace threats. A truly innovative ship, the Gerald R. Ford-class CVN will be the nucleus for our future carrier strike groups and a critical enabler of U.S. naval power for the 21st century. A major redesign of the Nimitz-class, Ford incorporates visionary advances in technology resulting in significantly improved combat capability and enhanced service life. Rear Adm. Mike Manazir recently released an article describing the unmatched value of the Ford-class, explaining the carrier's often overlooked return on investment over a lifespan of 50 years, and the ability of the ship to remain survivable, sustainable and relevant while its embarked air wing continues to evolve to keep pace with technological advances and incorporate future capabilities - a characteristic of Naval Aviation that cannot be overstated.

The Ford-class design enables the Navy to operate the carrier with less manpower, saving more than $4 billion in total ownership costs over the life of the ship when compared to today's Nimitz-class CVNs. CVN 78, the first in the Ford class, is on track to deliver next spring. Historically, the first of any class of ship or aircraft costs more than follow-on platforms, and the significant leap in combat capability, growth capacity for new technologies and life cycle cost reductions that were built into the Ford-class came with an associated initial cost. CVNs 79, 80 and the rest of the Ford-class ships will continue an acquisition strategy that will further drive down cost while delivering unmatched capability for the future. USS Enterprise (CVN 65), the most recently inactivated U.S. CVN, served the nation for 51 years, supporting generations of new aircraft while remaining at the forefront of national defense and providing decades of power projection options to our nation's leaders.

The carrier air wing, as the CVN's "weapons system," must also continue to transform to pace the future threat capabilities of potential adversaries. In order to project power we must first be able to understand the operating environment through intelligence, surveillance and reconnaissance (ISR) efforts and establish local air superiority for our forces to operate. Investments in platforms, payloads, sensors and communications are required to assure access, project power, and enable sea control in the future fight. Each platform assigned to the future carrier air wing will contribute to overall mission effectiveness and lethality by accomplishing a variety of missions.
UCLASS (Unmanned Carrier-Launched Airborne Surveillance and Strike) will be the next step in the Navy's revolutionary integration of unmanned air systems into the CSG and will provide the strike group commander with persistent ISR plus time critical targeting and precision strike capability. The real advantage this system brings to the fleet is its ability to operate in anti-access/area-denial (A2AD) environments and provide increased situational awareness of potential threats ahead of the CSG, essentially serving as the commander's initial "eyes and ears" in contested air and water space.

F-35C Lightning II will be an absolutely critical addition to the CSG's integrated warfighting package with stealth advantages that allow it to penetrate threat envelopes, the ability to detect and fuse information from many sources, and link that fused picture to other CSG aircraft, ships and decision-makers. F/A-18 Super Hornets, with the ability to carry large payloads of advanced weapons will continue to provide lethality and flexibility, and complement the F-35C to provide a very capable high/low mix of strike-fighters that can deliver responsiveness and firepower across the range of military operations.

EA-18G Growlers will dominate the electromagnetic spectrum, providing advanced airborne electronic attack capabilities, screening CVW and CSG assets conducting their missions, and protecting joint forces operating ashore by disrupting enemy communications. E-2D Hawkeyes have new radars that significantly improve their ability to search for and track targets while providing critical CSG command and control, and coordination of a range of missions, including integrated air and missile defense, and long range anti-air and anti-surface warfare. MH-60R and S helicopters remain a potent combination for defense of the CSG, with MH-60Rs acting as the primary anti-submarine platform in close proximity to the carrier.

Finally, the critical, future logistical connector for the CSG, CV-22 Ospreys will provide organic re-supply and transport services, as well as the flexibility to support other mission areas as required. Although external to the CSG, the integrated capabilities of P-8A Poseidons, working with Triton MQ-4C UAVs, will be key to successful strike group operations, enabling access, providing maritime ISR and conducting critical anti-submarine operations.

Through judicious application of resources and a focused, evolutionary investment strategy, the CVN and carrier air wing of the future will continue to be the primary platform called upon to deliver assured access, power projection and sea control well into the future. Absolutely critical to national security and stability in the 21st century, future CSGs will have the right platforms and new capabilities to operate in highly contested environments when required, while continuing to provide a persistent, flexible, forward-deployed force that will remain a stabilizing presence where it matters, when it matters, in an all too uncertain world.