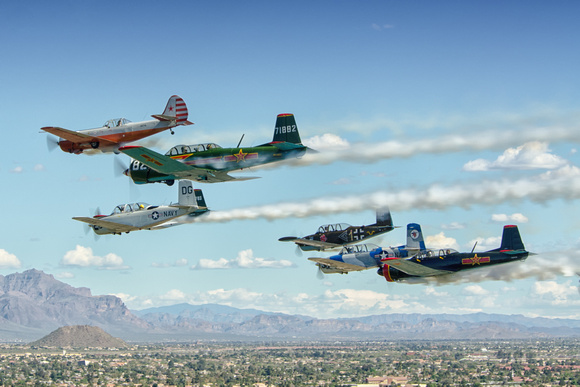 The RedStar Pilots Association is an international organization with members throughout the United States, Canada, Australia, New Zealand, the United Kingdom, Italy, and Germany.  The RedStar Pilots Association's mission is to promote and preserve the safe operation, display, and enjoyment of all aircraft -- jet to prop, aerobatic, sport, warbird and utility -- and especially those originating in the current and former communist block nations.  The RedStar Pilots Association strives to function as the primary clearing house for information related to the maintenance and safe operation of their aircraft.  They are an FAA-sanctioned signatory to the Formation And Safety Team (F.A.S.T.).  This allows them to train, qualify, and manage civilian formation pilots in the United States and Canada for the safe conduct of formation flight.  Pilots the world over benefit from formation training, at all levels, while the public's interest is maintained through their efforts to reinforce safety of flight.

I have been lucky enough to take part in a couple of their formation clinics, which are held multiple times each year in many different locations.  This allows pilots from all over the opportunity to take part in these clinics and hone their formation skills.  I have participated as a photographer in two of their mass formation clinics that have been held at Falcon Field in Mesa, Arizona.  The participants work on their flying skills in smaller two or three-ship formations, with the weekend culminating in the mass formation.  They always brief, fly, and debrief so they are able to learn from every aspect from the flight, right or wrong and good or bad.

The first mass formation I did with the group was to fly over the Cactus Fly-In that is held yearly in Casa Grande, Arizona.  During this formation I was in the back seat of a North American T-6 Texan, and we were located within the formation itself.  This meant that I was able to experience the formation, but my photos would be of individual aircraft or smaller formations within the mass formation.

The second mass formation I did with the group was to fly over the Phoenix-Mesa Gateway Airport Open House.  During this formation I was in the back seat of a Nanchang CJ-6A, and we were one of two designated photo ships.  This meant that I was able to watch and photograph the entire formation, but it also meant that I didn't have as many photos at the end of the day.

Both of these flights were amazing experiences and I would like to give a huge thanks to Scott Andrews for all the help, and to the amazing pilots of the RPA.  For more information about the RedStar Pilots Association, please visit their website at http://flyredstar.org.