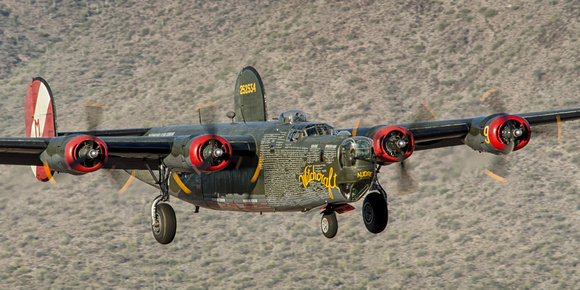 Every year, the Collings Foundation sets out on their massive Wings of Freedom Tour, bringing a variety of World War II aircraft to an airport near you.  The Wings of Freedom Tour recently stopped at Scottsdale Airport where I was able to catch them giving rides.  At each of their tour stops, the aircraft are open to the public to check out and walk through.  To be able to get so up close to these aircraft is a great history experience.  The aircraft are also available for rides, and to be able to fly on these beautiful aircraft is a truly awesome experience.  The Collings Foundation's Boeing B-17G Flying Fortress "Nine-O-Nine" was the first B-17 I ever flew on, and it was incredible.

The Collings Foundation is a non-profit, Educational Foundation (501c-3), founded in 1979.  The purpose of the Foundation is to organize and support "living history" events that enable Americans to learn more about their heritage through direct participation.  The original focus of the Foundation was transportation-related events such as antique car rallies, hill climbs, carriage and sleigh rides, and a winter ice-cutting festival in the Stow, MA area.  During the mid-eighties, these activities were broadened to include aviation-related events such as air shows, barnstorming, historical reunions, and joint museum displays on a nationwide level.

The Foundation’s 1944 vintage Consolidated B-24J Liberator is painted as "Witchcraft", an 8th AF bomber that flew a record 130 missions over Europe as part of the 467th BG.  The Boeing B-17G Flying Fortress flies as "Nine-O-Nine", an 8th Air Force, 91st BG heavy bomber.  The B-17 was the companion of the B-24 in thousands of wartime, bombing, and reconnaissance missions.  Together they were the backbone of the daylight strategic bombing campaign of WWII.  Joining the bombers is a P-51C Mustang escort fighter “Betty Jane”.  The P-51 was affectionately nicknamed by the bomber crews as their “Little Friends.”  The P-51 Mustang and the pilots who flew them saved countless lives in the skies and on the ground, and helped turn the tide of WWII.  The P-51 is arguably the finest fighter aircraft in the history of aviation.

The "Wings of Freedom Tour" has two goals: to honor the sacrifices made by our veterans that allow us to enjoy our freedom; and to educate the visitors, especially younger Americans, about our national history and heritage.  The Foundation encourages people to tour the planes, talk to the veterans who come to visit the aircraft, and participate in a "flight experience.”  Celebrating 26 years, the tour has made more than 2,900 visits to airports across the United States and Alaska.  While the exact number of visitors is difficult to gauge, it is estimated that over 3.5 million people see these fully restored historic aircraft annually.

It is always awesome to see these aircraft in the air, and I'm glad that I made it out to Scottsdale Airport to see them.  If you're interested in seeing these beautiful WWII aircraft yourself, head on over the the Collings Foundation's website to find out when they will be at an airport near you: