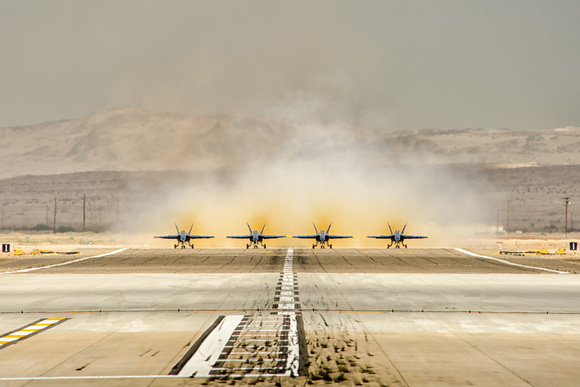 At the end of World War II, the Chief of Naval Operations, Chester W. Nimitz, ordered the formation of a flight demonstration team to keep the public interested in Naval Aviation. The Blue Angels performed their first flight demonstration less than a year later in June 1946 at their home base, Naval Air Station (NAS) Jacksonville, Florida.  The name was picked by the original team when they were planning a show in New York in 1946. One of them came across the name of the city’s famous Blue Angel nightclub in the New Yorker Magazine.

On November 8, 1986, the Blue Angels completed their 40th anniversary year when they unveiled their present aircraft, the McDonnell Douglas F/A-18 Hornet, the first dual-role fighter/attack aircraft, which is still serving on the nation’s front lines of defense.

The 2012 show season brought out more than 11 million spectators and since1946, the Blue Angels have performed for more than 495 million fans.


In April 2013, following sequestration, the Navy announced that the remaining air show season was cancelled as one of many steps to ensure resources would be in place for forces who were operating forward deployed.  With a fully-funded 2014 season, the Blue Angels are scheduled to fly 68 performances at 35 locations in North America during the 2014 season, making this our 28th year of flying the McDonnell Douglas F/A-18 Hornet.

The squadron spends January through March training at Naval Air Facility El Centro, California.  This is where I get to see them, flying their air show demonstration and practicing for their upcoming air show season.  It is truly amazing to watch the Blue Angels flying their McDonnell Douglas F/A-18 Hornets, and I look forward to going back every year.