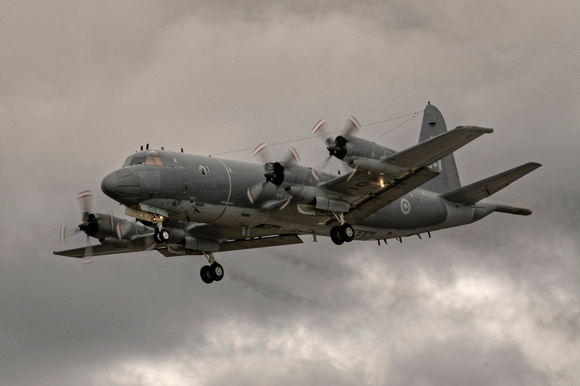 My wife and I were married on July 26, 2011, over 15 months later we decided to go on our honeymoon.  The plan was to drive to Southern California from our home in Phoenix, Arizona and spend almost a week.  Our first couple of nights would be in San Diego and the next few nights would be in Anaheim.  And yes, there is some aviation in this story.

We left early with plans of making San Diego and Coronado around lunch, the weather was nasty and the rain only slowed us down a bit.  We arrived in Coronado shortly after lunchtime and decided to eat at the Coronado Brewing Company.  We then wanted to spend some time at the beach, my wife would look for seashells and sand dollars while I took photos of aircraft arriving at Naval Air Station North Island.  With the weather still being dark and nasty and the complete lack of aircraft, I wasn't able to get the photos I was hoping for.  I did, however, catch a Royal Canadian Air Force Lockheed CP-140 Aurora (pictured above) from the No. 405 Long Range Patrol Squadron (LRPS).  I was also able to catch a US Navy Grumman C-2A Greyhound from Fleet Logistics Support Squadron 30 (VRC-30) "Providers." 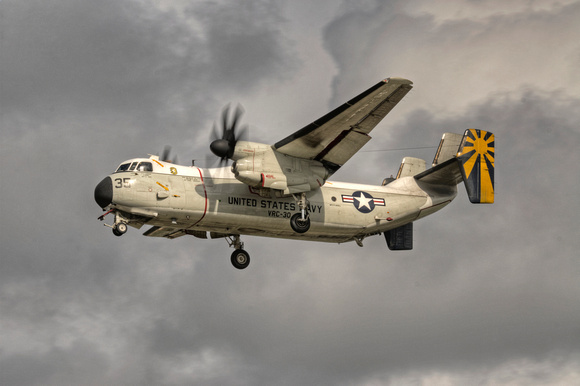 Our second day was all shopping and having fun.  During the day we went shopping at Horton Plaza and Seaport Village.  That night we went on a carriage ride through the Embarcadero with the Cinderella Carriage Co., this has become a tradition for us every time we visit San Deigo.  Then it was off to dinner at the Kansas City Barbeque, this little joint, right across the street from Seaport Village, was made famous by the movie Top Gun.  It was then off to Double Deuce in the Gaslamp Quarter for some dancing and also so my wife could ride the mechanical bull, it was her birthday the next day and that's what she wanted to do.

It was moving day, time to drive up to Anaheim and get ready for a full day at Disneyland and Disney's California Adventure.  First we needed to make a stop in Oceanside to check out the Top Gun house, also made famous by the movie Top Gun.  The house is starting to fall apart and all the other houses in the area have been torn down, but the city is trying to save this house from being demolished.  We also made a quick stop at The Wedge at Newport Beach.  This area is known for its large surf, but unfortunately, there were no surfers while we were there.

We started the morning at Cars Land at Disney's California Adventure, and finished the day with "Believe... In Holiday Magic" Fireworks Spectacular at Disneyland.  The lines were long, but we did manage to get on all of our favorite rides.  And we had an amazing dinner at the Blue Bayou which is inside the Pirates of the Caribbean, "Guests at the Blue Bayou sit 'outdoors' in perpetual twilight, surrounded by winking fireflies and the soothing sounds of the bayou's crickets and frogs, while boats filled with Guests heading into pirate-filled Caribbean waters drift past."  Ever since I was a little kid I had wanted to eat at the restaurant that was inside Pirates of the Caribbean, well on my honeymoon, I did!

This would be another relaxing day with not much planned.  We spent the morning at Los Angeles International Airport (LAX).  I wanted to catch an Airbus A380 or two, the aircraft I missed on my last visit to LAX.  The late morning/early afternoon light wasn't very good, but I was able to catch what I wanted.

We slept in, packed up, and hit the road back to Phoenix around Noon.  We weren't in any real rush to get home, so we decided to stop at the Palm Springs Air Museum.  This is an amazing museum with many of their aircraft in flying condition, I would recommend stopping by if you have the time and find yourself in the area.

Before we knew it, our honeymoon was over, it is now incredible memories of many fun moments and time spent with each other.