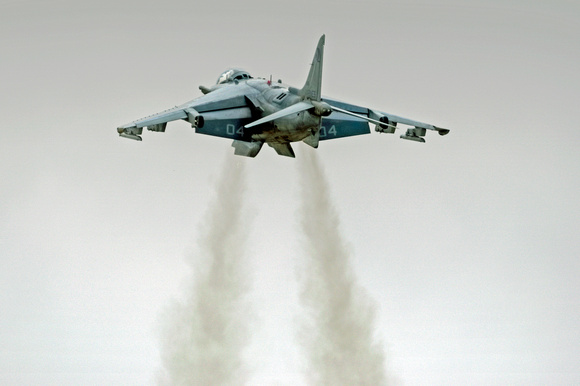 At 10:30am, the show began with the USMC 3MAW Band playing and the USA Military Free Fall School dropping in with the American flag. We were then treated to the sound of radial engines from the Commemorative Air Force and their F6F Hellcat, P-51 Mustang, and F8F Bearcat, and the Planes of Fame’s F4U Corsair flying in formation. Then four F-5 Tiger IIs, from VMFT-401, roared overhead and made a couple of low, formation passes. The USMC Search and Rescue HH-1N wowed the crowd as they lowered a man to the ground and then hoisted him back up in a display showing how they retrieve downed pilots and other injured Marines from the field. John Collver put his SNJ “War Dog” through an amazing aerobatic performance that included lots of smoke and music. And then we witnessed an awe-inspiring reenactment of the 1941 attack on Pearl Harbor when the CAF’s Tora! Tora! Tora! squadron took to the air. There was a quick intermission, and at 1:00pm, the MV-22 Osprey showed off some amazing tilt-rotor flight characteristics; V/STOL, hover, and forward flight. VFA-122 then demonstrated the power, speed, and grace of the F/A-18E Super Hornet before being joined by the CAF’s F6F Hellcat and F8F Bearcat for the Navy’s Legacy Flight. The loudest demo flight of the day was surly the AV-8B Harrier, as VMA-311 showed the power and precision of a combat aircraft that has V/STOL and hover capabilities. The final demonstration of the day was by the USAF Thunderbirds, showcasing the pride and precision of today’s Air Force.

According to the legend, some thought it was a giant eagle, others envisioned a hawk. When it took to the skies, the earth trembled from the thunder of its great wings, creating the legend. Officially, the “Thunderbirds” are known as the U.S. Air Force Air Demonstration Squadron. The squadron’s mission is to plan and present precision aerial maneuvers to exhibit the capabilities of modern, high-performance aircraft and the high degree of professional skill required to operate those aircraft. Within this broad mission, the team has five primary objectives:

The sights and sounds of the MCAS Yuma 50th Anniversary Airshow were awesome! MCAS Yuma did an amazing job planning and hosting this event, which drew over 60,000 people. I encourage everyone to get out sometime this year to support the men and women of the United States Marine Corps as they celebrate the Marine Aviation Centennial.

MCAS Yuma History
MCAS Yuma’s history began back in 1928 when Col. Benjamin F. Fly persuaded the federal government to lease the land from Yuma County, and Fly Field became a reality. When the United States entered World War II, an air base was erected with astounding speed. By 1943, Yuma Army Air Base had begun graduating pilots, and the base had become one of the busiest flying schools in the nation. Pilots were training on aircraft ranging from the AT-6 Texan single engine trainer all the way up to B-17 Flying Fortresses. But by the end of the war all flight activity here had ceased, and the area was partially reclaimed by the desert.

In July of 1951, the Air Force reactivated the base, and the airfield was named Yuma Air Base. It was renamed Vincent Air Force Base in 1956 in memory of Brig. Gen. Clinton D. Vincent, who was known as a pioneer of bombing techniques.

In January of 1959, the facility was signed over to the Navy and was designated Marine Corps Auxiliary Air Station, and in July of 1962, it changed again to Marine Corps Air Station. From 1962 until 1987, the air station served primarily as a training base for pilots flying the F-4 Phantom, A-4 Skyhawk, and AV-8A Harrier. In 1987, Marine Aircraft Group-13, with Marine Attack Squadrons 211 “Wake Island Avengers,” 214 “Black Sheep,” 311 “Tomcats,” and 513 “Flying Nightmares” became the major tenant command aboard the station.

Marine Aviation Centennial
Marine Aviation has a long and amazing history that began on May 22, 1912, when Marine Corps 1st Lt. Alfred A. Cunningham reported for flight training. He soloed after only two hours and 40 minutes of instruction (in a Wright Bros. Model B), and became Naval Aviator No. 5. In his honor, May 22 has become the official “date of birth” of Marine Corps aviation. When the United States joined World War I in 1917, the Marine Corps had just five aviators, including Cunningham. Today, Marines have deployed all over the world, including the protection of American Embassies under attack, and now have been called upon in Operation Desert Storm, Operation Enduring Freedom, and Operation Iraqi Freedom. These operations were supported by USMC F/A-18 Hornets (refueled in flight by the Marine Corps’ own KC-130 tankers), AV-8B Harriers, and many squadrons of rotary-wing aircraft (including the CH-46, CH-53, UH-1N and AH-1W). As we move into the 21st century, newer, more modern technology is taking to the air, with the tilt-rotor MV-22 Osprey and the F-35 Lightning II (soon to join Marine west coast air units).