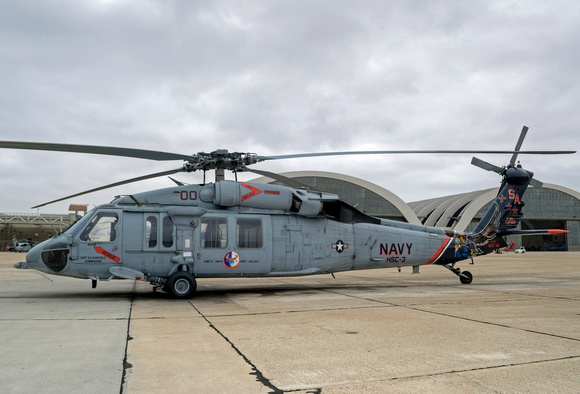 During a couple of recent visits to Naval Air Station North Island and Helicopter Sea Combat Squadron Three (HSC-3) I observed as maintenance and flight crews prepared their Sikorsky MH-60S Knighthawks for their next mission. And, on my second visit, I was also able to see the flight training firsthand at Naval Outlying Field Imperial Beach. I was able to watch HSC-3 pilots put their MH-60S Knighthawks through all sorts of maneuvers including auto-rotation and hovering. It was impressive to see both HSC-3 and the MH-60S Knighthawk in action!

On both of my visits I was able to talk with one of the squadron’s Fleet Replacement Pilots to learn about the mission of HSC-3 and to learn about the MH-60S Knighthawk. The Naval Aviator that showed me around and answered my questions has asked that I not release his name, but I still wanted to thank him for all the time and help he has given me. I truly appreciate the friendship we have formed over the past few months.

What capabilities does the Knighthawk bring to the fleet that previous H-60 variants (and legacy helicopters like the H-46 and H-3) did not?
The Knighthawk was designed to replace the SH-60F/H variants. The Fox variant in particular doubles as a cargo and not-very-capable sub hunting platform. The Knighthawk has zero anti-submarine gear on board. It is strictly designed to move up to 13 people or 5000+ lbs of cargo, and to carry weapons when required. It is designed to work closely with the new MH60-R model, which is the most capable sub hunting air platform in the Navy. Together, the two new models make up the Hunter-Killer team that is the Navy’s “Super Hawk” program.

The H-3 could do both these roles, but it is much more underpowered than the new H-60′s. The H-46′s are still used by the Marines, but as for the Navy, they are massive with 2 main rotors and take up a great deal of room on-board a ship, limiting their ability to land on any kind of single spot ship. The H-46 is also very maintenance intensive and is always leaking something. The Knighthawk solves most all of these problems and provides a massive upgrade in engine technology and reliability and a beautiful avionics system.

Do Knighthawks deploy aboard ships as well as shore-based squadrons or detachments?
Yes, Knighthawks deploy aboard both ships and shore based detachments. We normally deploy with larger aviation ships like carriers or amphibious assault ships, but we also work with supply ships and hospital ships. We have several shored based expeditionary detachments around the world as well. In fact, my upcoming deployment will take me to Kuwait to fly in the Naval Air Ambulance Detachment in support of MEDEVAC missions for contractors and personnel still on the ground in Iraq. Normally, Knighthawks do not deploy aboard cruisers, destroyers, or other single spot ships, the MH-60R model and older SH-60B’s continue to support those ships. We do also have the privilege to work with the SEAL community in the Knighthawk and provide them with transportation and air support.

What is the primary training curriculum of HSC-3 and how have real-world missions influenced it?
Briefly, HSC-3′s syllabus includes basic familiarization with the helicopter in various conditions along with a basic introduction to some of its missions. These include night flying on goggles, mountain/low-level flying, formation flying, instrument flying, ship deck qualifications, external cargo exposure, and strike/Hellfire missile training. The first half of the syllabus focuses on learning the aircraft while the second half focuses on learning to employ it in various missions. The whole syllabus takes approximately 8-10 months for newly winged Aviators, or much less for returning Aviators who have been out of the cockpit or type of model. With this broad spectrum of knowledge and missions, we can then train to higher qualification levels upon reaching our final fleet squadrons to meet specific real world needs and threats.

What are the advantages of training in southern California; do the mountains, deserts, and open-ocean of the region help to better prepare aircrews than other areas of the country?
I would like to think we get much better training here than our Norfolk-based brethren! We are fortunate to have mountains, ocean, and desert here, so there is much more ability for exposure to different environmental types than there is for our sister fleet replacement squadron on the east coast (HSC-2). Therefore it is possible for us to practice basic mountain flying and low level flight in canyons and valleys, while they may not see this for quite a while. We also can experience “brownout” landings in the desert much sooner than they.

Simply flying in such busy airspace with the commercial and general aviation traffic, near Marine air bases, and the proximity of the Mexico border makes for a trial by fire experience. Coordinating with SOCAL Approach or other facilities in the area can be difficult, but a great learning experience. Overall, it really is amazing training and a welcome change from Florida or the east coast. 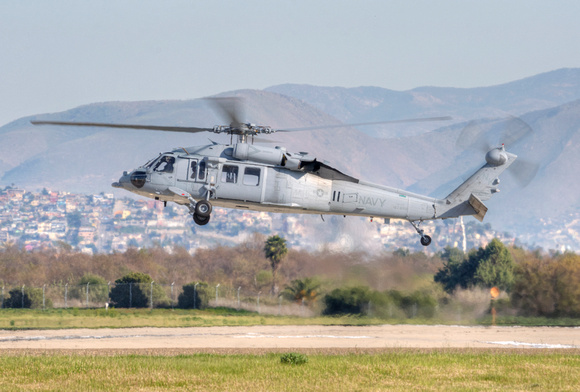 My visits weren’t just to take photos and learn about HSC-3, it was also to learn about Naval Aviation through the eyes and experiences of a Naval Aviator:

What has being a US Naval Aviator taught you?
I’ve learned a lot about being a part of a team/family of fellow brothers and sisters that I have the privilege to fly with. As we all go through flight training, it is not something that you accomplish without a great deal of help. I have been very fortunate to have received plenty of help from peers further along in the pipeline, outstanding instructors who volunteer their own free time, and encouragement from former Aviators in the local community. Flying, especially helicopters, really enforces the beauty and necessity of working together to accomplish a goal or mission, and I love being a part of that.

Additionally, outside of work, the bond and camaraderie that we share as fellow Aviators is rivaled by few other professions. We get to work hard together during the weeks and kick back and play hard on the weekends. It has been great to get to spend time with so many fun people outside of work, in some amazing places like Florida and California.

What has being a Merlin taught you?
Being a Merlin has taught me more about how to employ my aircraft for a greater cause. Be it Search and Rescue, External Cargo Operations, Logistics, Anti-Surface Warfare, or Strike operations, one begins to realize that all the training and skills we have developed as pilots over the past several years start to develop into second nature as we use these massive and capable aircraft as instruments to accomplish numerous missions in support of others.

What is your favorite part of being a Merlin?
Simply put, flying the MH-60S. At the same time, I have loved getting to be a part of the replacement pilots and wardroom of officers that we have at HSC-3. There is an extremely high concentration of very experienced, very good instructors who know how to teach the finer points of flying such a massive and maneuverable aircraft. I’ve worked with good and bad units in the military and just getting to know and be a part of this group at squadron socials and events is wonderful, and I enjoy going in to work there every day, and it is easily worth all the time and hard work we put in.

What is your favorite memory of flying Knighthawks?
One of the best memories I had was in my very first flight in the MH-60S last fall; I had been used to flying much smaller and very underpowered TH-57′s (basically a Bell 206 Jet Ranger) – I distinctly remember loving the feeling of pulling in collective for the very first time in a massive 18,000 lbs/65 ft long helicopter and could not believe the sheer amount of power it could produce as I shot up over the San Diego Bay in a 2500 fpm climb!

That amount of extra power later manifested itself to doing night time VERTREP training down at NOLF IB, and I remember standing underneath the Sierra for the first time hooking up an external cargo load to it as my buddy flew a side-flaring “quick stop” to 10 feet over my head and it felt as though a 150 mph hurricane force wind was about to blow me across the concrete practice pad.

And, as a Naval Aviator I will always remember the first time I landed on a boat, for me an amphibious assault ship 50 miles of the California coast. You suddenly realize then that all the training and precision that goes in to instructing you to get this level has paid off, and it is an amazing feeling to be operating off the deck of a ship in the middle of nowhere.

What other helicopters have you flown, and how is the Knighthawk similar or different to them?
The only other helicopter I have flown is the TH-57B/C variants (aka Bell 206). However, we are trained in Cessna 172′s and T-34C’s prior to selecting helicopters, so I am qualified to fly both fixed and rotary wing. The Knighthawk is so different in its size, power, dual engines, mission capabilities, and just the way it flies. There are a lot more computers on-board and the Advanced Flight Control System provides much more stability and ease of control in a hover than most other helicopters out there. One big difference is the massive glare-shield can be quite difficult to get used to looking over and around – especially when flying on night vision goggles.

A special thanks to the men and women of HSC-3, NAS North Island, NOLF Imperial Beach, and the United States Navy.