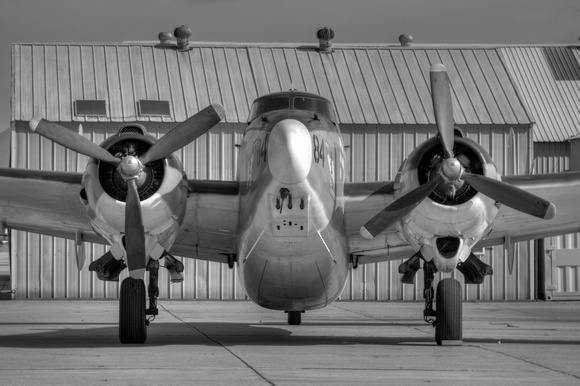 The Lockheed PV-2 Harpoon was one of the lesser known bombers of World War II. Its on-board radar and extremely long range enabled it to act as forward reconaissance as well as escort for other bombers such as the Consolidated B-24 Liberator. They mainly saw military service out of the Aleutian Islands flying against Japanese forces in the Northern Pacific.

This specific Lockheed PV-2 Harpoon was delivered to the US Navy as Bureau Number (BuNo) 37472 on November 19, 1945. In December of 1945 she was assigned to the aircraft pool at Naval Auxiliary Air Station Holtville, California. In February of 1946 she was transferred to the aircraft pool at Naval Air Station Litchfield Park, Arizona, and in June of 1946 she was put into storage at NAS Litchfield Park. In 1957 she was transferred to the civil registry as N5223V, and in 1963 this was changed to N7670C. In 2006 Dave Hansen, of Dave’s Custom Sheetmetal/Aircraft, LLC., in Heber City, Utah, purchased Lockheed PV-2 Harpoon N7670C and began restoring her back to her 1945 US Navy look and configuration. During the restoration she was given the name Attu Warrior in honor of all the Lockheed PV-2 Harpoons that flew from Naval Air Station Attu, Alaska, which was on Attu Island, the westernmost of all the Aleutian Islands. Today Attu Warrior is one of the most accurate and fully restored Lockheed PV-2 Harpoons around.

A special thanks to the National Air & Space Museum for providing the Aircraft History Card for the military inventory history of this Lockheed PV-2 Harpoon.